24.7 billion tenge will be invested in the reconstruction of the irrigation systems of Zhambyl region 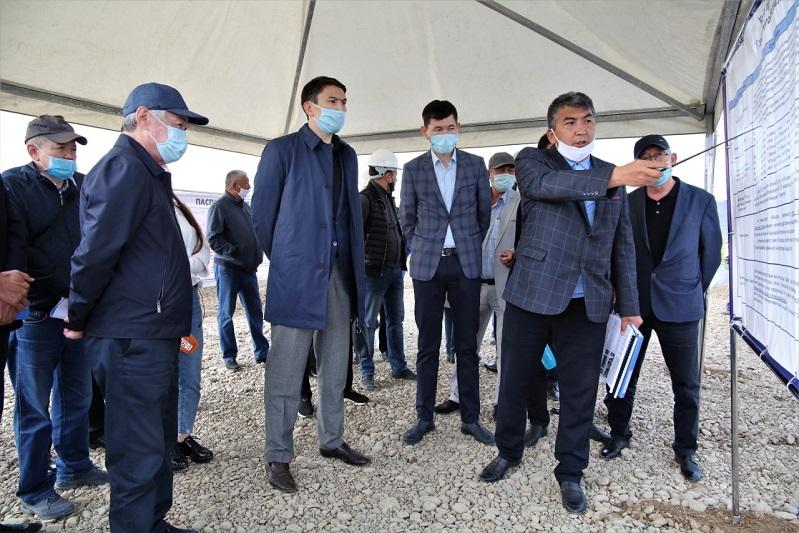 Significant reduction of irrigation moisture deficit and increase of irrigated land area are planned in Zhambyl region this year, reports a correspondent of INA "Kazinform".

According to the press service of Akim of Zhambyl region, Minister of Ecology, Geology and Natural Resources Magzum Mirzagaliyev paid a working visit to the region. The purpose of the visit, in which the Minister was accompanied by Regional Akim Berdibek Saparbayev, was to get acquainted with the projects implemented in the water sector to create an effective irrigation system, which is vital in increasing the irrigated land area.

Today, the irrigated area of Zhambyl agricultural land is about 110 thousand hectares. The task is to increase these areas to 200 thousand hectares. After the reconstruction of irrigation systems, this figure should increase to at least 180 thousand hectares. In Zhambyl district, more than 3 thousand hectares of fields are connected to the Rais main canal system with inter- and intra-farm canals. Here, 36 farms are planting alfalfa, maize and melon crops. Meanwhile, 1,332 hectares are not used due to lack of water. The reconstruction being carried out will solve this problem. The situation is similar on the 8.4 km long "Ismail" main canal - 798 hectares of irrigated land will be restored here. Implementation of the second phase of the project on improvement of irrigation and drainage systems will improve the ameliorative condition of the irrigated lands of Zhambyl district on the area of five thousand hectares. In total, 310 objects of water management hydromelioration systems will be reconstructed in the region through a 24.7 billion tenge loan from the European Bank for Reconstruction and Development. Head of the branch of RSE "Kazvodkhoz" Kazybek Bedebayev among the problems noted the need to increase the volume of the Karakonyz reservoir from 8.5 million cubic meters to 18.5 million, the poor condition of the hydrological post in the village of Zhasorken, repair of retaining structure of Chemical Park Taraz LLP. "In addition to repairing canals, it is also necessary to build wells, if possible to concrete all available canals. It may cost a little more, but it will last much longer and will significantly reduce water loss," Berdibek Saparbayev emphasized. Minister of Ecology, Geology and Natural Resources Magzum Mirzagaliyev recalled the instruction of the President to increase the area of irrigated land from 1.6 to three million hectares in the next 10 years. Such projects are important for the development of agriculture and improvement of living standards of farmers, the Minister stressed. In the Baizak District the repair of the main canal "Baizak" with intra-farm canals Tuimekent, Donsary, Utegen, Uzyn with the length of 21.9 kilometers continues. As a result, 1,000 hectares of irrigated arable land will be restored. And the reconstruction of the main canal "Sambet" with intra-farm canals Otarbek, Bolpan, Anar and Utelbalik will add another 700 hectares of irrigated land. Berdibek Saparbayev and Magzum Mirzagaliyev got acquainted with the activity of the mechanized detachment of Baizak district on cleaning the canals, which has 17 units of equipment. The workers started cleaning the fifth canal in Talas district. As a result of the mechanized unit's activities, the rates for this type of work have more than halved and more and more farmers are getting access to irrigation water. Also on this day, the head of the Ministry of Ecology visited a number of water management facilities in Shuz and Korday districts, noted the press service of the Akim of Zhambyl region.