Wheat exports for the year increased by 27% 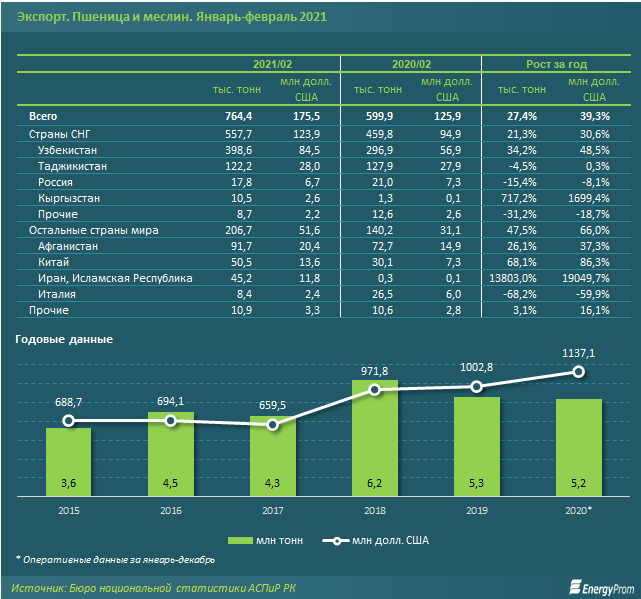 In January-February this year, the country's companies exported 764.4 thousand tons of wheat and meslin - 27.4% more than a year earlier. In monetary terms, exports reached $175.5 million, an increase of 39.3% over the year, World of NAN reports, citing the analytical portal Energyprom.

According to the portal, most of the export went to CIS countries: 557.7 thousand tons. The main importer of Kazakh wheat was Uzbekistan: 71.5% of Kazakhstan's total exports to the CIS countries. For the two months Uzbekistan imported 398.6 thousand tons of wheat worth $84.5 million. UZBEKISTAN EXPORTED $84.5M OF WHEAT FOR TWO MONTHS.

Kazakhstan delivered 206.7 thousand tons of wheat to non-CIS countries - 47.5% more than a year before. The main importers were Afghanistan, China and Iran.

Overall, in January-December 2020, the country supplied to foreign markets 5.2 million tons of wheat for $1.1 billion. The annual decrease in export volumes in physical terms was 3.3%; while in monetary terms there was a growth of 13.4%. 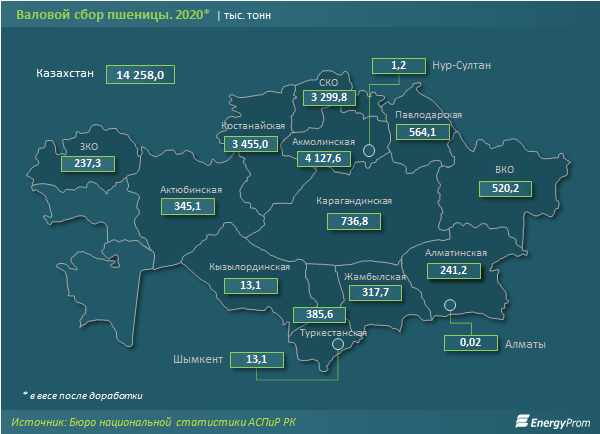 At the end of 2020, the gross harvest of wheat was 14.3 million tons - 24.5% more than a year earlier. Akmola region harvested the most crops: 4.1 million tons, plus 25.3%. Kostanay and North Kazakhstan regions were also in the top three.

To recall, the mass sowing in the main grain-growing regions this year will start in mid-May. According to the information of regional Akimats, to date 2.4 million tons of seeds filled up, which amounts to 100.4% of the plan. In addition, 136.2 thousand tons of mineral fertilizers were delivered to agrarians.