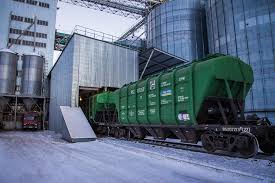 More than 4.7 million tons of grain were transported by railway workers in 7 months of 2020. Of these, 1.3 million tons belong to the domestic transportation, which is 2% higher than in 2019, and 3.4 million tons are exported. During January – July, NC KTZ JSC provided loading of more than 1.5 million tons of flour and milling products. Issues of transportation of new crop grain were discussed during an online meeting chaired by Mr. Kanat Almagambetov, First Deputy Chairman of the Management Board of NC KTZ JSC.

The meeting was attended by representatives of government agencies, "NC "Prodcorporatsiya" JSC, "Astyk Trans" JSC, as well as grain traders. The meeting was held as part of the Comprehensive Plan to prepare for the transportation of grain of the new crop.

It was noted that compared to the previous year, grain loading for export decreased by 1.3 million tons, including the one to the European direction, the countries of Central Asia, Iran and China. Reasons for the decrease in traffic include a low harvest in 2019, the introduction of restrictions on exports due to the coronavirus pandemic, and others. At the same time, loading grinding products tend to grow in all directions by an average of 43%, with the exception of Uzbekistan.

Mr. Kanat Almagambetov noted that it is necessary to coordinate the actions of all participants in the transportation process in order to provide efficient grain transportation.

With rational use of the fleet, while reducing the excess delay of rolling stock on the access roads of shippers, it is possible to eliminate the risk of an autumn shortage of cars.

Uneven loading during the month also creates an artificial shortage of rolling stock. Every month until the 5th day, the daily loading is up to 60 grain carriers. From the second decade of the month, the number of applications increases sharply to 1200 grain carriers per day.

To increase the speed of movement, KTZ is ready to form block trains (grain and flour shuttles) to Uzbekistan and Central Asian countries.

A set of various measures aimed at supporting shippers who transport agricultural products is also being implemented. So, for 2020, discounts are set to the current rates of the CIS Tariff Policy for the transportation of grain cargo and flour from Kazakhstan in transit through the territory of Uzbekistan.

From March 1 to the end of 2020, discounts are set for the transportation of wheat and flour in cars, regardless of their ownership, to Afghanistan in transit through the territory of Uzbekistan.

According to tradition, the grain transportation headquarters will start working on October 1 to promptly resolve issues related to the organization of grain transportation in the central office of the Company under the leadership of the First Deputy Chairman of the Management Board of NC KTZ JSC.  Round-the-clock work of operational grain groups will be organized at the Akmola, Kostanay, and Mangistau road departments.

At the end of the meeting, Mr. K. Almagambetov noted that for its part, NC KTZ JSC will take all possible measures aimed at ensuring the applications of shippers in full.