How Kazakhstan can increase agricultural income by $6 billion? 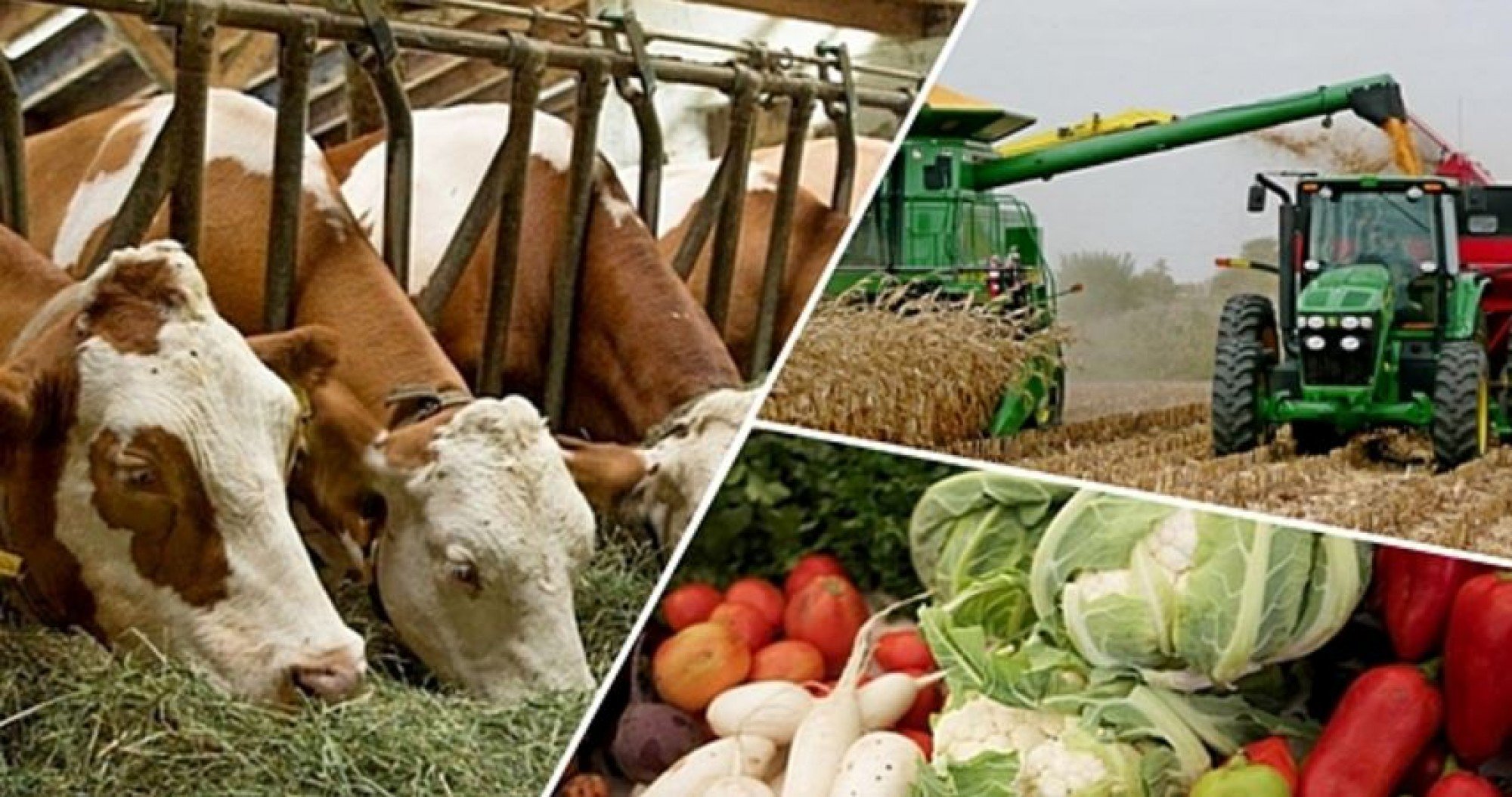 For the ten months of 2019, agricultural exports amounted to $ 2.6 billion, and the share of the total volume was only 5.4%. That is, agriculture has a weak effect on the development of foreign trade relations. Nevertheless, Kazakhstan can increase profitability from the sphere by at least 3 times.

Kazakhstan has a huge, not fully utilized agricultural potential – 80% of the country’s territory is characterized as agricultural land, but only 40% or 96 million ha are used in this sector. The reasons for the low development of resources remain the problems of poor productivity, the effectiveness of state support instruments, the remoteness of the science of the agro-industrial complex from business, and also the underdevelopment of the systems for marketing and storage of agricultural goods. Nevertheless, in the face of declining world energy prices and high oil volatility, it is agriculture that can become a key impetus to the country’s economic development.

The current state of agriculture in Kazakhstan is characterized by a low impact of the industry on the national economy. For the nine months of 2019, in the structure of GDP, agriculture, forestry and fisheries took only 4.3% or 1.9 trillion tenge. In general, over the past ten years, the industry’s share ranged from 4.2% to 4.9%, breaking the border only in 2009 and 2010 with 6.2% and 6%, respectively. It should be noted that in the late 1990s, the indicator was at a higher level – 8 – 9%.

The development of agriculture in Kazakhstan is given great attention. One of the main tasks of the Government is to increase the competitiveness of agribusiness as one of the key drivers of the national economy. To achieve this goal over the years of independence of Kazakhstan, ten program documents were developed on the basis of which the state policy in the field of agriculture is implemented:

Statistics show that agriculture is growing, but slowly and unsustainably

A set of measures undertaken by the Government to timely solve the problems of the agro-industrial complex is already demonstrating positive dynamics. So, gross output over the past five years has shown stable growth with an average annual dynamics of 9%. However, in longer dynamics, for example, since 2010, sharp changes in annual growth rates are observed with an interval from -12% to 49%, which is due to the industry’s dependence on natural and climatic conditions. For example, in 2011 the volume of gross output increased by 49%, due to a record harvest of grain crops, and in 2012 the figure decreased by 12%.
In the current year, following the results of eleven months, the gross output reached 4.9 trillion tenge, an increase of 17% compared to the same period in 2018. The regional leader is the Almaty region, the output of which amounted to 798.5 billion tenge. The North Kazakhstan region (625.2 billion tenge) and Turkestan region (591.1 billion tenge) also reached record output. 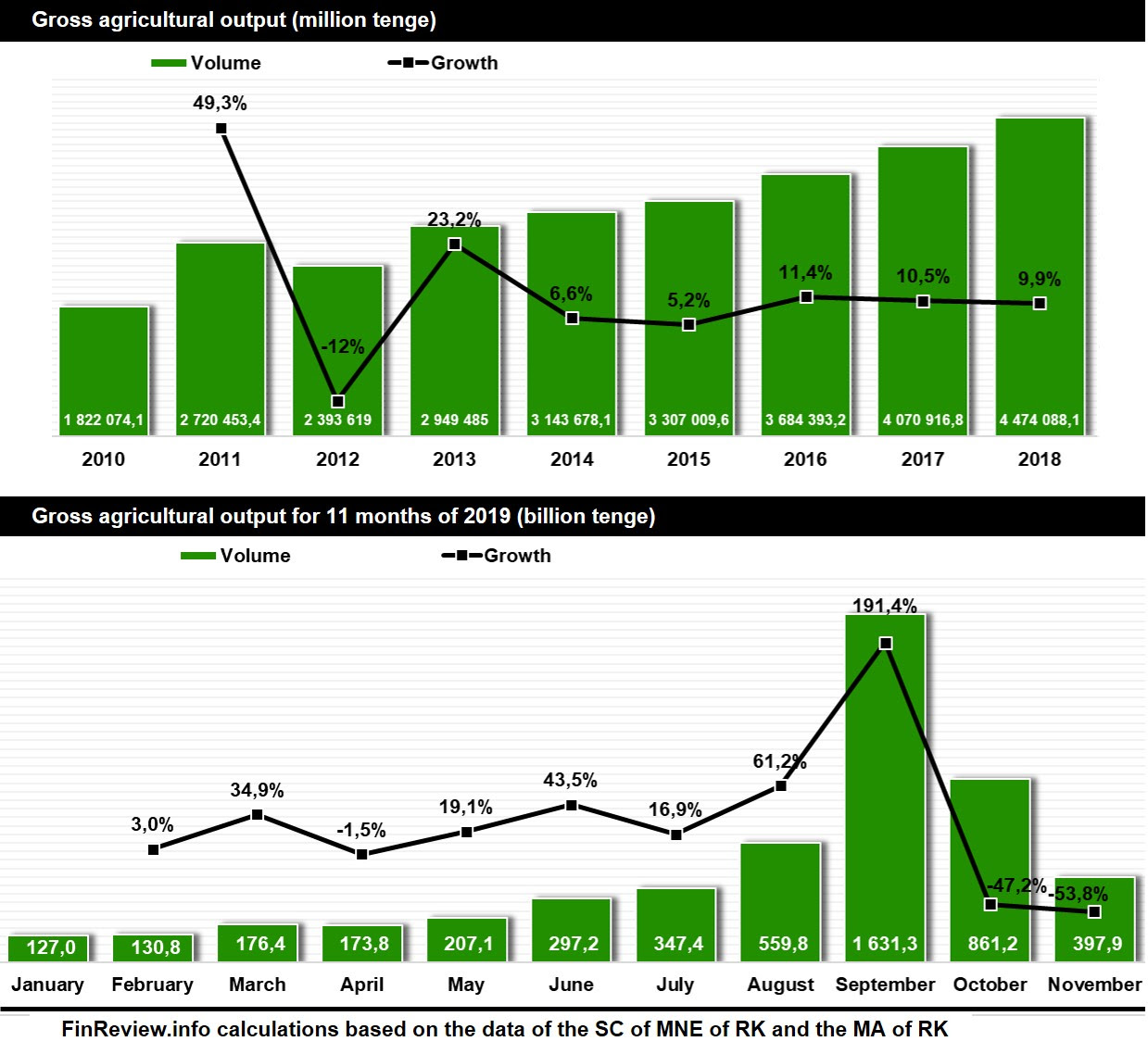 Obviously, the limited sales market and poor transport and logistics infrastructure significantly inhibit the country’s production capacities. However, the systematic work carried out in this direction also allowed us to achieve tangible results. So, over the past ten years, the annual export of agricultural products in Kazakhstan ranged from $ 1.6 billion to $ 2.7 billion. And in 2018, manufacturers managed to overcome the border of the interval, reaching $ 3 billion (annual growth was 30.5%). 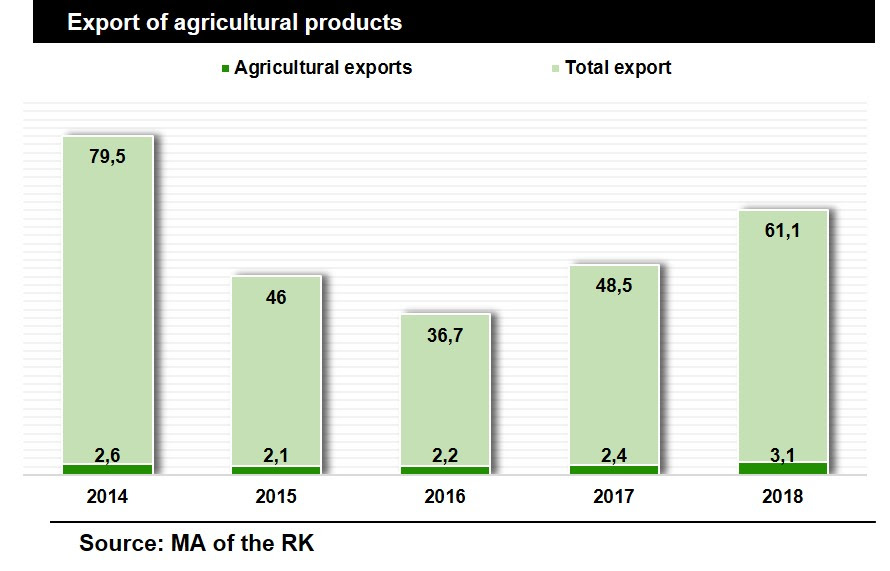 For ten months of 2019, exports amounted to $ 2.6 billion, and the share of the total volume was only 5.4%. That is, agriculture has a weak effect on the development of foreign trade relations. For comparison, in countries with high agro-industrial potential, agricultural exports exceed $ 4 billion. For example, in 2018, Russia exported products worth almost $ 7 billion, China – $ 11.5 billion, Japan – $ 6 billion.
Nevertheless, Kazakhstan can increase the profitability of agricultural production turnover by 2.5 times by 2022. Growth impulse may be an increase in the production of highly profitable types of crops, such as lentils, flax and soy. So, in 2018 Kazakhstan exported 33 thousand tons of soybeans at a price of $ 400 per ton, while a ton of wheat costs 2 times cheaper.

Despite the annual increase in agricultural production and its exports, the agricultural potential of Kazakhstan is not fully disclosed. A number of serious barriers hinder its development, namely:

First, the development of the agricultural sector is constrained by the limited attraction of additional capital. For example, foreign investors have become less interested in agriculture in Kazakhstan. Over the past four years, there has been a sharp decline in FDI with an annual rate of decline of 45%. If in 2015 the volume of FDI was at the level of 71.5 million US dollars, then in 2018 – 11.2 million US dollars. And, for the first half of 2019, the volume of FDI amounted to $ 6.6 million. 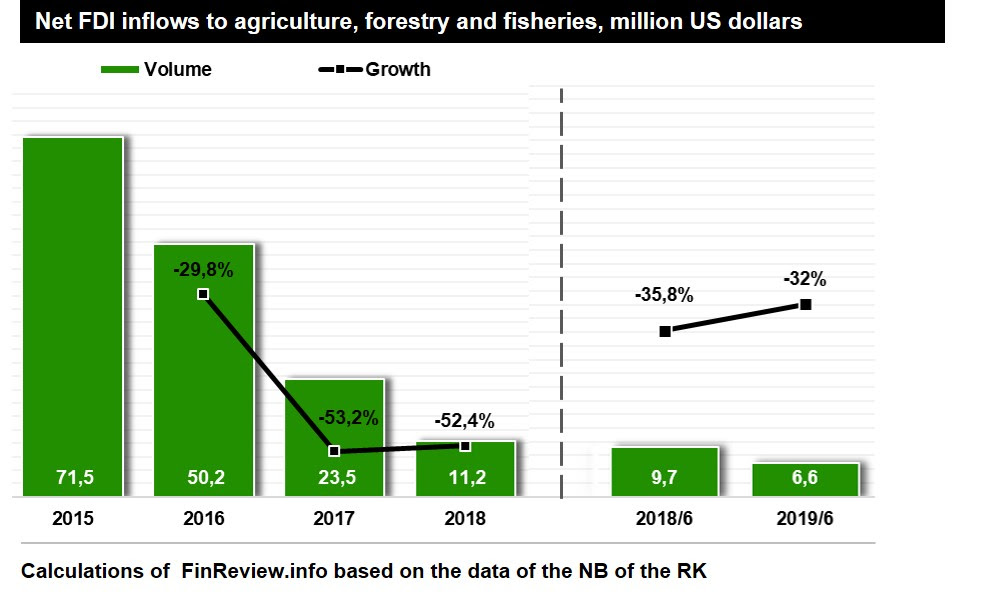 It should be noted that the global dynamics of FDI as a whole demonstrates a negative trend: in 2018, global investment flows decreased by 18.4%, to $ 1.2 trillion. The annual decline in global investment over the past three years reflects global investor alertness to the economies of the countries, one of the reasons for which may be the inherent expectations of the global economic crisis in the coming years.

Secondly, the downward dynamics of FDI forces producers to increase investment in fixed assets at their own expense. Over the eight months of 2019, the volume of investments in fixed assets in the sphere amounted to 263.7 billion tenge, an increase of 50.1% compared to the same period in 2018. At the same time, the lack of funding sources or excessive claims of creditors force manufacturers to finance enterprises at their own expense. As a result, 78.3% of capital investments are formed from the capital of enterprises. Borrowed funds amounted to 16.6%, and the share of bank financing – only 5.1%. 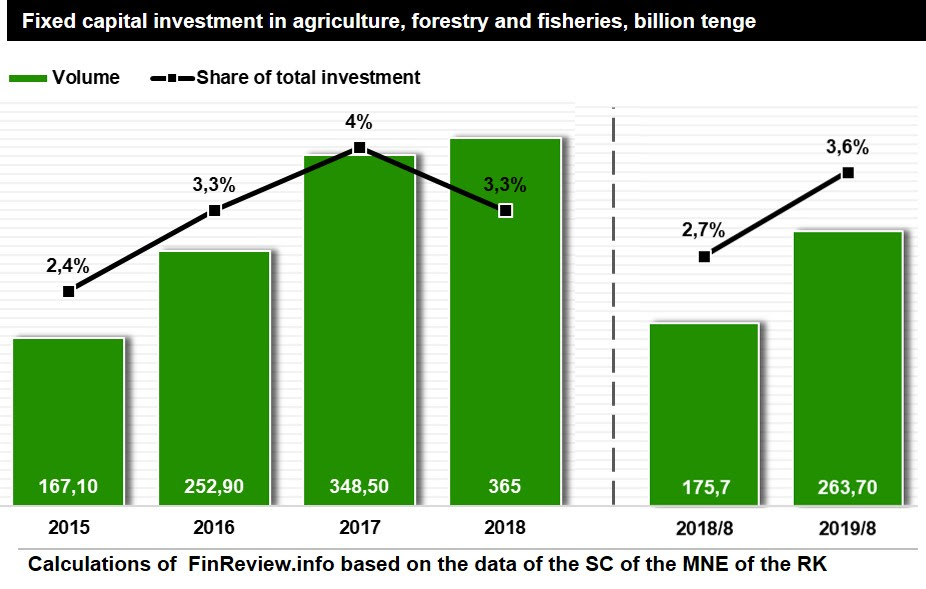 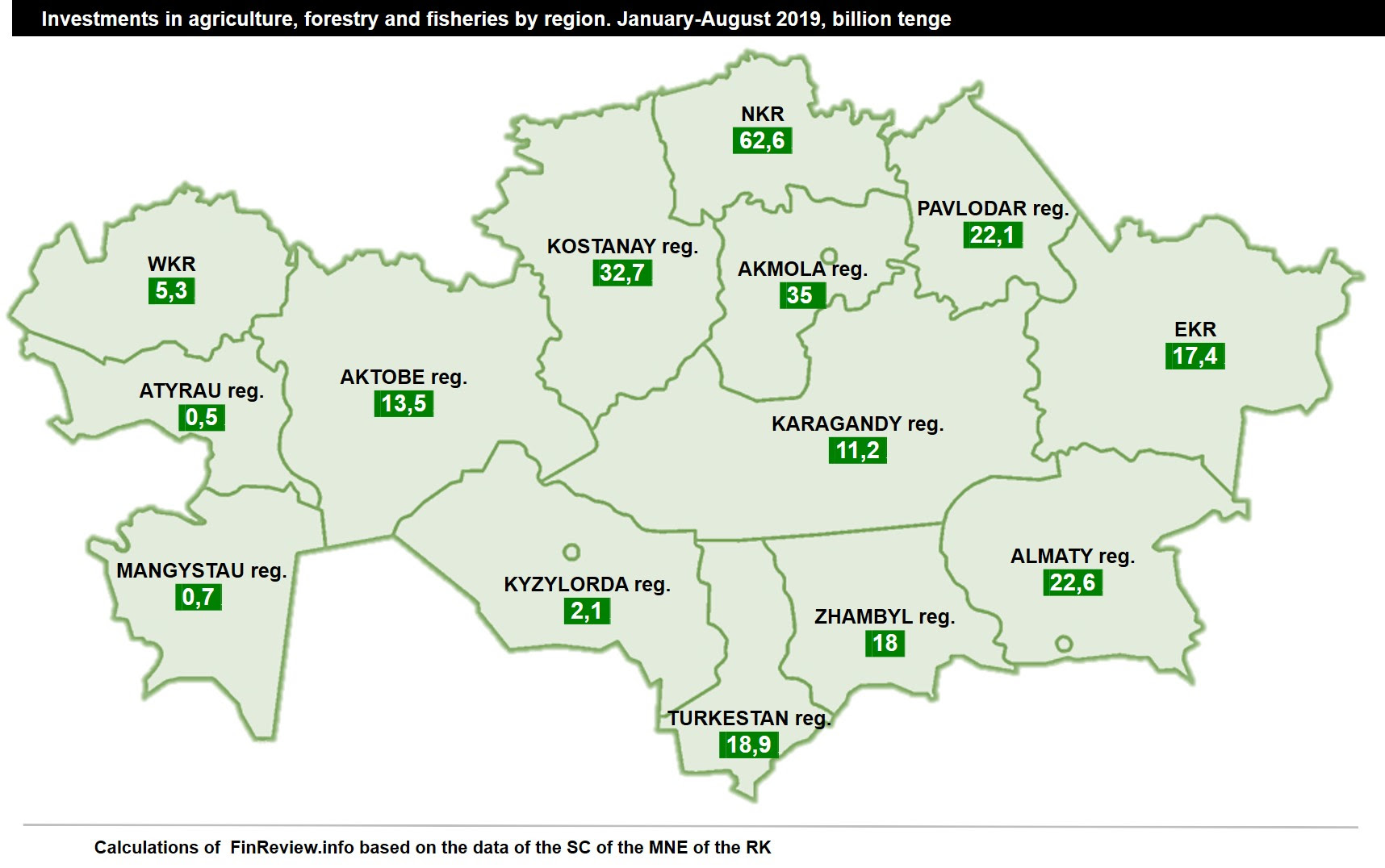 One of the reasons for the low rate is the lack of technical equipment. Thus, the degree of depreciation of machinery and equipment in agriculture is 45%, and 1 tractor per 1 ha of agricultural land in Kazakhstan, while in the USA – 27, in India – 16, in Brazil – 11. Moreover, the service life of special equipment in the country exceeds the standard period of 17 years, which as a result increases the cost of repairs and fuel and lubricants by an average of 20% and leads to lower harvests.

Fourth, the inefficiency of the distribution of subsidies. In Kazakhstan, one of the financial support mechanisms for agricultural producers is subsidizing cattle purchased from foreign countries. However, this requirement is disadvantageous for small and medium-sized enterprises, due to the high cost of foreign enterprises.

Fifth, 80% of the country’s agricultural products are sold as raw materials, without processing. Moreover, over 90% of investments in fixed assets in the sphere are directed specifically to the cultivation of seasonal crops (58.2%) and animal husbandry (32.3%). As a result, Kazakhstan annually loses $ 1.5 billion.

Sixth, problems of storage and marketing of agricultural products, which directly affect the competitiveness of the agricultural sector, are of no small importance. There are 21 transport and logistics centers in the country, however, with annual production growth, the available capacities are insufficient.