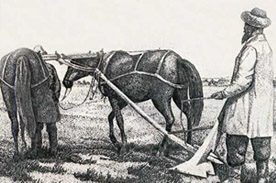 The tradition of agriculture among the Kazakhs has a long history. It was especially developed in the south and in Semirechye. It is understandable. The climatic conditions of the region made it possible to grow various crops. However, when speaking about the history of the development of agriculture in Kazakhstan, the subject of irrigation in particular its methods cannot be circumvented.

The most important thing is proper watering

Irrigated agriculture was the first to receive its development. There were two types of irrigation - irregular and regular. In the first case, people used plots of river valleys for crops, which spring floods abundantly drowned. This method of irrigation was mainly used in the valleys of such rivers as Ili, Shu, Talas, Torgay and, of course, in the valley of one of the main river arteries of Central Asia - the Syr Darya. Moreover, residents of the Lower Syr Darya, according to scientists, used the lake as a kind of reservoirs already in the middle of the 1st millennium BC. Moreover, there were objective reasons for this. The fact is that in this region of the river there were two periods of high water - spring and summer. After, the river level decreased, leaving farmers without water. Then such reservoir lakes were saved. An interesting way to preserve irrigation water was in the Balkhash. Here, the lowlands between the dunes, poured into the spring thaw, were specially fenced, not allowing water to go into the steppe. Surprisingly, the water in such peculiar reservoirs persisted all summer, with the advent of cold weather it froze. In spring, when the bottom of the reservoir was exposed, this land was plowed up.

There was also a transitional method of watering. Something between regular and irregular. During the flood of the river, they specially chose a place, enclosed it with a dam - “beget”, and then, as necessary, water from this source was supplied to the fields. Thus, we came to the most popular method of watering of the Kazakh farmers of the past. In order to supply water to vast fields, people created an irrigation system, through which water flowed by gravity to the fields. However, because Kazakhstan is still a steppe region, where there are not many large rivers, large irrigation canal systems were not found so often. However, with great skill, the locals used what nature gave. Mostly streams. Where the rivers were full flowing and fast, special irrigation systems were used. For example, for dozens of kilometers of the left bank of the Syr Darya there was basin irrigation. This means that irrigation water came to the fields from 2-3 artificial lakes that connected the channels. However, the inhabitants of the southern slopes of Karatau used a different way to water their fields. Here, such a type of irrigation as karez irrigation was in demand. Moreover, it is no less laborious than the ones mentioned above. What is this method? Large deep wells were connected by underground drainage channels and already from there the water went to the fields. But not only the gravity system was used by farmers of Kazakhstan several centuries ago. Crops were watered using water-lifting devices. Perhaps the most common water-lifting device was shygyr. This is a wooden wheel up to 5 meters or more in diameter, along the rim of which buckets are attached. A special gear system connected the wheel to a lever driven by animals. Thus, shygyr supplied water to sections from steppe rivers with a deep channel. We could see such constructions on the rivers about the life of the villagers. 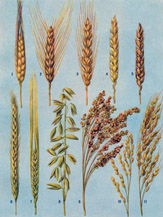 What grew up on the fields cultivated by Kazakh farmers?

And what did Kazakh farmers grow by watering the fields in such ways? Mostly the fields were sown with wheat, millet, rye, barley, oats, in the south - rice, cotton, etc. Moreover, they could sow several varieties of wheat. Especially the residents of south-eastern Kazakhstan could afford this diversity. They even had their own "local" varieties. Admittedly, there are not so few of them. Such varieties as “Ak Bidai” - white wheat, “Kyzyl Bidai” - Red wheat were in special demand. They could sow such cultivars as “Kara sul” - a black-spikelet with small dark-brown grain, it was not uncommon usage for it as to feed horses. But various varieties of wheat were also grown in other regions of Kazakhstan. For example, the cultivar Lyselik was grown in the mountainous regions and in the north of Kazakhstan, Tiecp Bidai, and Luchin Bidai - wheat with white awn, were easily threshed and gave white flour.

In demand with Kazakh farmers was millet (tary). And given the difficulty, sometimes harsh climatic conditions of the steppes with extensive farming, this plant was suitable like no other. Well, first of all, this crop is very low maintenance. A good crop could be harvested, both at irrigation and at dryland. What varieties used? For sowing, “ak tary” - white millet, “Kyzyl tary” - red millet and “shokdy” - the earliest and highest yielding variety, were used. In addition, trading varieties of millet were known - “ak bikesh”, “Konyr Sholak”, “Konak”. And they were highly appreciated. Along with wheat and millet, our ancestors sowed oats - "suly" and barley - "arpa", rye - "kara bidai", rice - "shaly" and melons - watermelons, melons, pumpkin. Garden crops such as onions (piyas), carrots (saebіz) were also grown, and in those areas where immigrants from the western regions of the Russian Empire lived, locals especially liked potatoes (kartom), cucumbers (khiyar) and other vegetables.