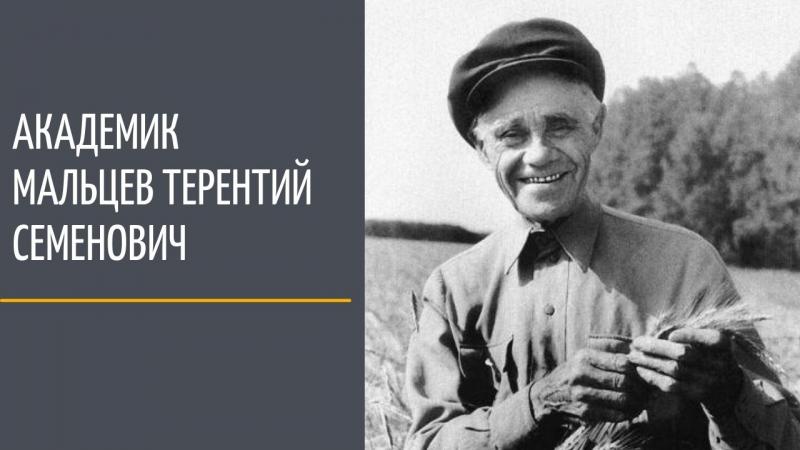 Why do you need literacy, my son?

A cheerful man in his years with a simple peasant face looks at us from this photo. By the time the photographer captured him in a field with ears of wheat in his hands, he was already a world-famous scientist. Most certainly, he remembered his father, who worked in the field and tied the future of his son with agriculture too. In a manner of speaking, he was right but only partially. His son – Terenty Maltsev will be engaged in agriculture, but not as a simple peasant farmer, but as an innovative scientist. Terenty Semenovich was born on November 10, 1895 in a village with the meaningful name Maltsevo of Krivsky volost of the Perm province. It should be noted that this village is still called the same, but it is now located in the Kurgan region. He grew up in a family of Old Believers. All the wealth of the family was an old horse and cows. Despite the boy’s inquisitive mind, his father was sure that his children didn’t need education, everything would come with life experience, and studying at school, even if only for a few years, was a waste of time, effort and money, and that more benefits will come from simple peasant's work. However, little Terenty strongly disagreed with such approach to life. Thus, began his strive for knowledge. Admitting that this desire could end in disrepair for him, he learned to read in secret. Here was how he, several decades later, recalled this period of his life: “From early childhood, I had an extraordinary passion for reading. There was a school in our village, but my father did not let me study, he used to say why did you need literacy my son? An illiterate man clings to a plow harder. Everything comes from God, you need only pray harder."

The First World War, of course, did not bypass a simple peasant family. Two years after it started- in 1916, Terenty was drafted into the royal army. He was on the German front. One could say that military battles ended for him the very next year. In 1917 he was in German captivity. Thus starting other battles – with illness, hunger, constant beatings. However, at that very time, epoch-making events were taking place in his native country - two revolutions occurred changing the political system, the Civil War was on the horizon. However, this did not break the simple peasant lad. On the contrary, in captivity with other similar prisoners of war, he created the Russian section under the German Communist Party. Terenty Maltsev saw his native land only four years later – in 1921. It was a terrible time. The Civil War ended, country was in ruins. Then there was a crop failure and a terrible famine that claimed millions of lives. At the same time, his personal life was getting better. He met a girl named Tatyana. They got married and brought nine children to the Maltsev family, but unfortunately, they lost three of them.

Terenty Maltsev understood that crop failure is affected not only by natural disasters, general post-war devastation, but also by the methods of agriculture that the peasants use. Thus in 1922, the future scientist-agronomist began the first selection experiments in his life. He had to literally work alone in the field. Here is what Terenty Semenovich himself says: “I decided to go to the field alone. Despite the protests of my father, I began to harrow. Having destroyed the crust, I reduced evaporation”. It yielded its results. The soil retained moisture, but at the same time, weeds appeared, but Maltsev easily plucked them, and only after that started sowing. His neighbors, however, worked the old-fashioned way, but they only began weed control much later, and there was no time for that. As a result, in the fall, the neighbors harvested many times less than our hero did. This was the first victory of the future academician. Then he brought his attention to the fact that seeds that accidentally fell on the roads adjacent to the fields and were trampled into it, nevertheless, gave excellent shoots. This occurrence prompted the idea that it might not be worth it to engage in diligent deep plowing, in many ways this method leads to the evaporation of moisture. Maybe it is better to only process the topsoil? Literally 4-5 centimeters so that the seeds can develop. Such an experiment he was allowed to conduct in a small area of the field. In the fall, villagers convinced of Terenty Maltsev being right. Due to his innovative method, in terms of hectare, he received 26 centners of wheat. While those who worked the old fashioned way barely gathered five quintals per hectare. In addition, this allowed him already with full confidence to engage in breeding experiments. Maltsev began to work on the cultivation of early ripe varieties of wheat. 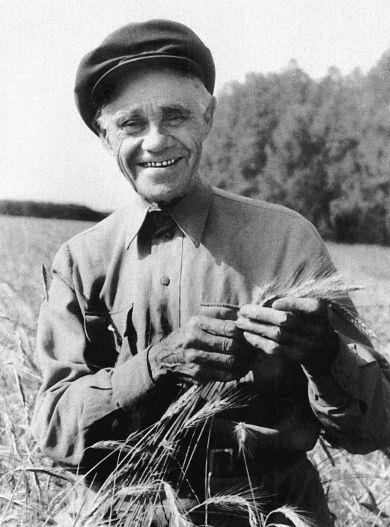 We hand you the most valuable commodity – the land!

In the late 1920s and early 1930s, when collective farms were created, villagers chose him as a field farmer for the collective farm “Zavety Ilyicha”. As he took office, he heard the chairman say: “We are handing you the most valuable commodity - the land!” Hold it in high esteem! Make it yield more and more bread every year, clear the weeds. Thus ensuring prosperity on the collective farm, so that more grain could be given to the country”. Under his command, the fields of his native collective farm gave invariably rich harvests. In the first spring, collective farmers supported his proposal for early closure of moisture for weed germination. Moreover, in the fall they collected in the bins a hundred pounds per hectare. The whole country had already started talking about the achievements of the young agronomist. In 1950, the Shadrinsk experimental station appeared on the collective farm of "Zavety Lenina". It made sense that it was Terenty Maltsev who headed it. After all, all his life he urged to comprehensively engage in research work in agriculture. It was under his leadership that 4 varieties of wheat were bred and tested in practice - Shadrinskaya, Vera, Kurganskaya-1, Collectivnaya-2. It was extremely important for him to be in a constant search for the most optimal methods of cultivating the soil, giving priority to the conservation of moisture and working with various sorts of wheat. Terenty Semenovich died on August 11, 1994. He lived for almost a century. The achievements of Terenty Maltsev are appreciated by the state. He was twice awarded the high title Hero of Socialist Labor, holder of six orders of Lenin, two orders of the Red Banner of Labor, orders of the October Revolution and the Badge of Honor.

Recognizing the merits of a scientist

One of the founders of conservation agriculture in the virgin lands of Kazakhstan, Academician Alexander Ivanovich Barayev, giving respect to Terenty Semenovich Maltsev, fully recognized his invaluable merit in creating completely new approaches to solving agricultural issues. Mainly in the fact that it was not annual plants that deplete the soil, but excessive dump processing. Moreover, the internationally recognized scientist not only recognized the merits of Terenty Maltsev, but also went much further, which they call, moved from words to deeds. Alexander Barayev proved in practice all the advantages of the “Maltsev” approaches to soil cultivation, based on the alternation of deep soilless tillage in a steam field with mulching treatments in other sectors of the crop rotation field. It is this symbiosis of systems that allows achievement of the most positive and efficient effects on soil fertility, namely, significant improvement of its structure, appearance of humus, and more retaining of its moisture.