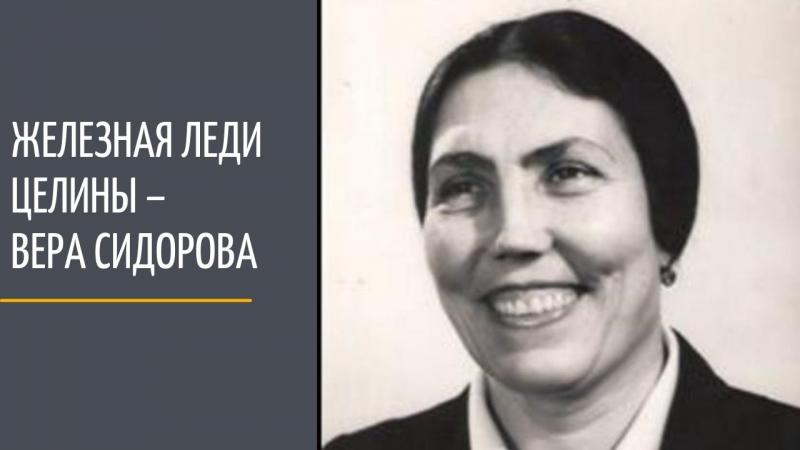 Sidorova Vera Vasilyevna can easily be called one of the most outstanding figures of the virgin epic. Once her name thundered all over the USSR. She is a Hero of Socialist Labor, a holder of two Orders of Lenin and three Red Banners of Labor, deputy of the Supreme Soviet, deputy chairman of the Presidium of the Supreme Soviet of the Kazakh SSR, a member of the Central Committee of the Communist Party of Kazakhstan.

Vera Vasilyevna was born on August 15, 1934 in a peasant family in the village of Upper Tishanka, Talovsky district, Voronezh region. Her father was recognized as a kulak and was exiled to the Far East.She was brought up by her grandmother. In 1941 she entered the elementary school of her native village, but because of the war she stopped her studies. In 1953, she received secondary education and in the same year entered the Kazan Agricultural Institute, which she graduated in 1958.

In the spring of 1958, went on a Komsomol trip to the virgin lands in the Kazakh SSR. She was appointed agronomist of the first branch of the state farm "Dzhambulsky" in Kostanay region. She actively participated in Komsomol activities. 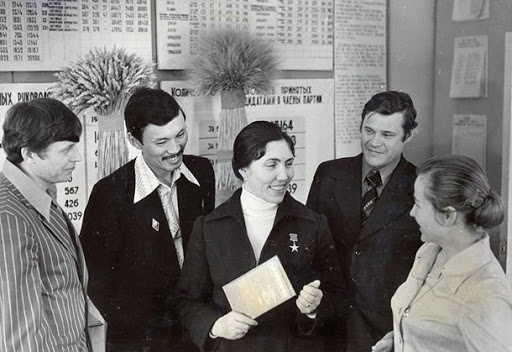 During a trip to the USA (to the state of Oklahoma) as a part of delegation of Committee of Soviet women got acquainted with the Norwegian journalist Eva Erikson who has entered it in the book about outstanding women of the planet published under the aegis of the UN.

We recorded a large interview with Vera Vasiliyevna, in which she spoke in detail about her glorious career and life in the early virgin lands.

Vera Vasiliyevna told us that she was sent to the virgin lands on May 5, 1958 - in the territory of present Kostanay region. There were seven people in their squad. And already on May 7 she started her first day of work. The young girl was entrusted to lead two tractor brigades and 10 thousand hectares of land.

She lived in an ordinary carriage together with mechanizers from Ukraine and Belarus, all of them came right after graduating school. She says that the first years were difficult - there was no water, they fed on sprat and bread.

"I ran from unit to unit, watched the depth, purity of all the material, in short, all the agro-technical requirements. I had only one pair of shoes. To keep them intact, I ran barefoot. And when I see that the management is coming, I put my shoes on. Now it's hard to even imagine such a thing," recalls Vera Vasilyevna.

Then, the sowing season ended and hay mowing started. And local guys, according to her, behaved very poorly: cracking sunflower seeds and spitting and swearing.

"But I straightened them up. Being a direct and frank person, I went to the office, stayed there for a couple of days, got all their production figures for the year, found out who worked well and who didn't. I put them up on this big poster, and that was it, everybody stopped arguing and started to do better at work. I just had to find the key - the reason that excited them," Vera Vasilyevna said.

Then she organized 12 sports sections, which was not difficult, considering that Vera Vasilyevna herself had the first category in skiing (she was a champion at her institute) and second category in shooting. She also played basketball, volleyball, did track and field athletics, amateur art and dramatic reading.

"I bought several pairs of skis, table tennis with my own money. I brought them and we started to compete. Then the director of the state farm invited me and said: "Thank you for establishing order". During those times, the district party committee watched the young specialists very closely. All of us were on watchlist- on how well we worked. Then, I was noticed and invited to the district Komsomol committee. At first, I categorically refused, but an instructor came for me, put me in a car, brought me to the district, and without my application they accepted me as a candidate for the Party and sent me to work in the Komsomol," Vera Vasilyevna recalled.

But she did not work for long - only a week. She says that she was bored and missed the farm. However, party workers did not take no for an answer - they came for for Vera Vasilievna again, elected her for the first secretary of the Komsomol district committee.

This was followed by appointments of the second Komsomol committee of the region and the first secretary of the Komsomol regional committee.

"I was told in the district committee of Komsomol: 'Establish order in 12 state farms of the district, as you did in the state farm where you worked within a year'. They meant sections, meetings, performances and so on. I took up this job and started to travel to the state farms. The state farm directors believed in me, and that was the most important thing. They came for me so that I could tell about the culture of agriculture, discipline and evoke a sense of duty, and to hold competitions. I was very well received," Vera Vasilyevna said.

At the same time, she noted that the work was not always easy, because not only Komsomol activists came to the virgin lands, but also probationers - there was a need for manpower.

And the Central Committee of the Komsomol of the Union demanded that all youth, who came, should be registered.

"A train from Crimea once arrived. Half of the arrived people had criminal records. I said to the instructor: "Annushka, go 60 km away and register everyone". She went to them, was insulted there and came back with tears in her eyes. I sent a man, a second secretary. He came and reported that he could not reach an agreement with them. I got on a motorcycle and to them. I drive up, enter the center and see a bottle of homemade alcohol on the table, and the "ringleader" sitting nearby. He was covered with tattoos. I was offered to sit down, I sat down. Then they say: "Until you have a drink with us, we will not talk. I didn't back off, I drank, though I only weighed 50 kilograms. And then I started to tell them why I came. At the end I gave them an order to make a list and left. I came up to the motorcycle and saw that the tires were slashed, the headlights were unscrewed. I came back and put my keys in front of them. I said, tape and screw them up, prepare the lists and bring them to the designated place," Vera Vasilyevna recalls.

Persistence and straightforwardness of the young girl played their part: the motorcycle was put in order and brought to the designated place along with the lists.

Meanwhile, the work on the virgin land was in full swing, new people came, everyone had to be watched, to make sure that the state farms were in order. Then Vera Vasilyevna was elected secretary of the Party District Committee - this is like an akim of today.

"And the district was where I worked for 10 years. I was 32 years old when I was elected the first secretary. And directors of state farms were veterans of the war of 1912-1917 years of birth. Who am I? I was like a granddaughter to them. They were preparing to be the first to be elected. But they elected some girl. Naturally, there was resistance on their part, but I did not pay any attention to it, I did my job and did not engage in any disputes," Vera Vasilyevna said.

According to her, her education was very helpful in her work, because she had to deal with design and estimate documentation and other working materials. This was something that local state farm managers often could not do.

"But they kept their state farms in full order and firmly. They believed each other and always helped. It was they who gave me the "glasses" to see people. I am very grateful for it. Time changes the character, approaches, and work style. But as a leader you can't always knock on the table with your fist, make everyone stand straight. On the contrary, it is necessary to be with people, in the thick of events. When in 10 years I left, I was also called by the first secretary in the larger Kostanay district, they warmly saw me off: they brought flowers, cried. Do you have any idea what an emotional explosion it was? A new enthusiasm and a desire to serve the state and these people was born in me," Vera Vasilyevna recalled.

In the new district (near Kostanay) Vera Vasilyevna was in charge of 26 state farms, which were mostly headed by former high-ranking officials of district executive committees and other party structures. Therefore, a young woman was immediately warned not to bother them!

"Well, I think, if I have managed to cope with strong farmers, then I will find an approach to these too. I gathered them and said: "I am familiar with the profile data of the directors who are present here. Each of you has a regional guardian. I was warned that I am not allowed to critisize some of you, while to others I am not allowed to increase your plans. But all of you are the same for me as I am for you. I will judge by the way you work. I did not swear an oath to anyone. Work well in the name of the state, since you were appointed to these positions. And people reached out to me and started to work well. In 1976 there was great harvest, we made a record harvest", - says Vera Vasilyevna. 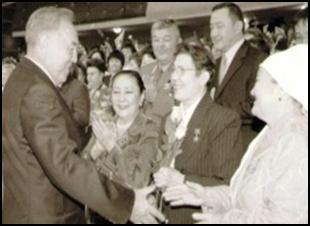 That's when Dinmukhamed Kunayev came to the district, she said, with whom she had a good working relationship.

"He embraced the wheat and told me, 'How much grain will you deliver? I say, '25 million poods. He went on to say: "If this number is correct, the star of the hero will be yours. And I answered him: "Thank you for your kind words, but it is better to let a house of culture be built in the district center. A huge district center, near the city, and a house of culture in some hut. Kunayev immediately told his assistant: "Write down, if there is grain, there will be a house of culture, and there will be a star of the Hero of Socialist Labor on your chest. Then he left," continued Vera Vasilyevna.

And already in December 1976 the correspondent of "Kazakhstan truth" came to Vera Vasilyevna's house to record the interview about awarding the high rank. Because no other neighborhood, both in Kazakhstan and Russia, had ever given up so much grain at that time.

Then, recalls Vera Vasilyevna, Dinmukhamed Kunayev asked her to come to the current West Kazakhstan region to the post of Second Secretary of the Regional Committee, today it is the first deputy akim. And there were no second female secretaries for the USSR then.

"I knew what a responsibility it was," Vera Vasilyevna said.

She says she tried to never change her principles, and worked with people in the same way she always did - openly and honestly.

Also Vera Vasilyevna was a member of the Committee of Soviet Women for 15 years.

"I was sent first to America and then to Japan to promote the image of Soviet women. I had to sleep little then, read and drive a lot, meet a lot of people. We were well received everywhere," Vera recalls. 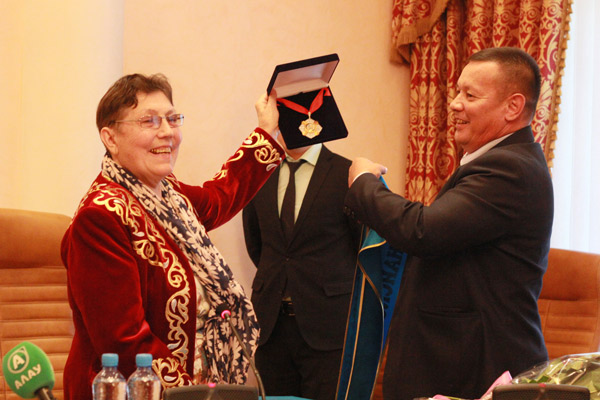 There is no doubt that Vera Vasilyevna has written her name in the history not only of the development of virgin lands, but also of Kazakhstan. The example of her life teaches us that any work should be treated with integrity and passion, then the career growth will not be long awaited, and respect of colleagues, friends and other people around will be a pleasant addition.