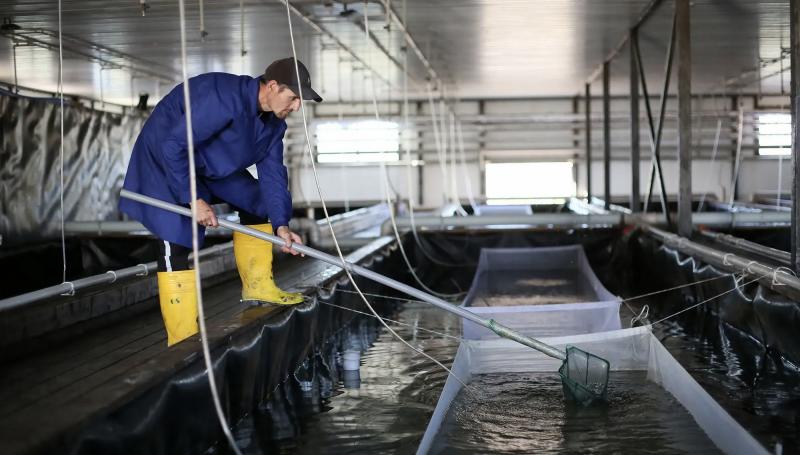 Kazakhstan plans to grow about 270 thousand tons of marketable fish a year by 2030. This figure will be achieved within the framework of the fish industry development program by 2030, adopted at a government meeting, World ofNAN reports referring to the press service of the Ministry of Ecology, Geology and Natural Resources.

Implementation of the Program will allow to create new fish farms and bring the existing ones to full capacity, the department believes.

"The Ministry together with scientists and experts conducted an analysis of the potential for development of the country's fish industry. The result showed that up to 600 thousand tons of fish per year can be grown in the country's reservoirs. We are planning to achieve this step by step and 45% of potential will be reached by 2030 and the remaining 55% - by 2040. We are planning to create 545 new hatcheries and 323 operating hatcheries will attain their full project capacity", - the Minister informed, presenting the program at the government session.

Minister underlined that at the present moment there are already exemplary results in the framework of legislative harmonization.

These include the introduction of quarterly payment for the use of fish resources instead of annual ones. According to Magzum Mirzagaliyev, previously the business paid payments for fish catch prior to obtaining a permit, which was a significant financial burden.

"In addition, the Rules for transferring fisheries bodies of water from fishing to fish farming have been approved. This will give the users of commercial fishery an opportunity to switch to fish farming, especially in the northern regions where there are numerous lakes and they are most suitable for fish farming. A specific term of conclusion of the Contract for fish farming for 49 years is established. This will allow businesses to invest in fish farming with confidence and make long-term plans," the report said.

He noted that in the structure of the cost of fish expenses for fodder make up to 70% of total costs. That is why the quality and efficiency of mixed fodders are decisive factors for profitability of fish breeding. According to M.Mirzagaliyev, the country has 15 fish farms that provide 12% of juvenile carp species and 66% of sturgeon juveniles and the need for fish planting material for 10 years is 2.5 billion pieces. In this connection, in order to reduce dependence on imported fish plants, the Ministry proposed creation of selection and genetic centers for 4 fish breeding areas, construction of 2 new nurseries: trout and whitefish by 2022, implementation of PPP mechanism in 4 state fish nurseries.

"It is advisable to place them in 5 regions - Almaty, Akmola, East Kazakhstan, Turkestan and Mangistau regions. The Ministry also started negotiations with participation of local investors on construction of a joint plant with a world-known Danish company "Aller Aqua" for production of fish fodder," - said the head of the Ministry of Ecology.

M.Mirzagaliyev also touched upon the issues of subsidizing. The new program considers partial compensation of expenses for creation and expansion of fish processing complexes. This issue is proposed to be solved by a separate target allocation of funds for fish farming.

According to the Minister, special attention should be paid to personnel provision. Within 10 years 4 thousand people will be trained within the frames of abovementioned program in order to conduct fish breeding. They will be trained in operating institutes of higher education of Kazakhstan as well as in special educational institutions.

"For this purpose it is necessary to reorient educational programs on fish farming with increase of educational grants from 40 up to 400 per year. We will carry out this work together with the Ministry of Education and Science", - said M.Mirzagaliev.

Thus, implementation of the above-mentioned measures, according to the minister, will allow to: grow 1,1 mln tons of fish to the amount of 2,2 trillion tenge in 10 years; increase domestic consumption of fish products to 134 thousand tons per year; increase fish consumption from 4 to 8 kg per person and come close to fulfillment of the WHO recommendations by 50%; achieve increase of export revenues to 330 mln dollars; decrease of import volumes from 45 to 25 thousand tons by increasing of trout and sturgeon production. In addition, it will contribute to the creation of at least 50 thousand additional jobs and increase incomes of the population mainly in rural areas.