The history of life of Dinmukhamed Kunaev 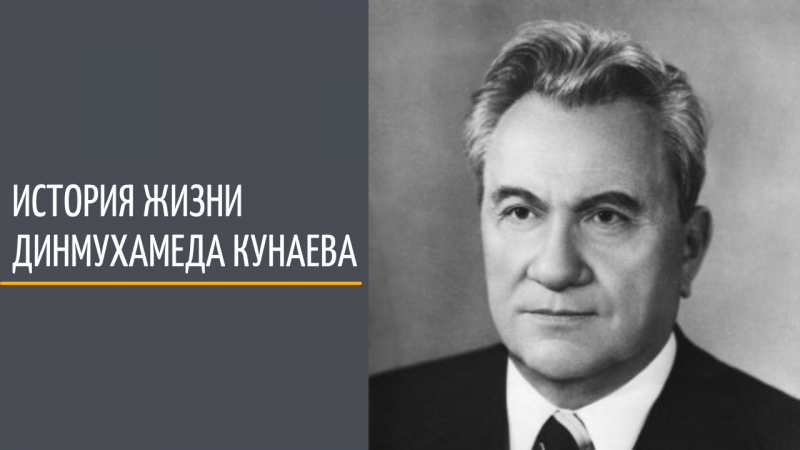 1993 year. Almaty. Spring. Children's excited chatter can be heard. The air is filled with scent of lilac. The city is surrounded by greenery. An elderly man sits in the office of his apartment, a heap of old black and white photographs lay on the desk in front of him. They tell a story. No, not of him and his family. They depict the history of Kazakhstan in the twentieth century. A man takes each photo and examines it very carefully. Before his eyes, images from the past resurrect. Here he stands on the platform of the party congress in Moscow, and in this photo he is surrounded by farmers in the field, and here he meets with Indian Prime Minister Jawaharlal Nehru. Dinmukhamed Kunayev remembers everything as if it were yesterday.

LONG-WAITED SON IN THE KUNAYEV FAMILY

Dinmukhamed Kunayev was born on January 12, 1912 in the city of Verny in a family of livestock breeders. He became the third child in the family and the first long-awaited boy. His father, Minliakhmed Zhumabayevich, was a very educated person, had excellent command of the Kazakh and Russian languages, and held positions in trade organizations of the Almaty region. Mom, Zaure Bairovna, came from a poor peasant family. In the first grade, Dinmukhamed went to three-year school # 19, then moved to nine-year school # 14, which he graduated from. It was at school that he determined for himself that he would work in the mining industry, which was gaining momentum in those years. And the smart teenager understood that the future lay within it. He enrolled in evening classes, and in order to at least somehow help his parents, in his spare time from school, unloaded fruits. Later he moved to a more honorable place - the authorized person of Kazsberkassa, then became a statistician under the State Planning Committee of SNK. In 1931, his dream came true - he became a student at the mining department of the reputable Moscow Institute of Non-Ferrous Metals and Gold. The beginning of the thirties is one of the most tragic pages in the history of the Kazakh people. Stalin's collectivization turned into a real disaster for the nomads. Famine came to the endless steppes - the Great Jute. More than a million Kazakhs died, hundreds of thousands of people, fleeing hunger, were forced to leave their native lands. There, in Moscow, Kazakh students heard about the famine, but did not imagine the scale of the tragedy. WHen he arrived for a vacation to his parents home, Dinmukhamed Kunayev realized what misfortune befell on his people. Then there were business trips to Ridder, where he also witnessed a massive famine. And he never forgot about it.

A TICKET TO THE BIG LIFE

He received the coveted diploma of a prestigious university in 1936. A young mining engineer was sent to his native Kazakhstan to the Kounrad Pribalkhashstroy field. At the exact time when it was decided to build the Balkhash copper-smelting plant- the largest plant in the Soviet Union. Construction work on the shores of Lake Balkhash was controlled by several departments in Moscow — the People’s Commissariat for Heavy Industry and the USSR Academy of Sciences. This idea of construction was born on the special control of people in the Kremlin. Conditions: to say they were non-existent was to say nothing. Workers and engineering staff of the future giant lived in such conditions: in the summer the heat was more than forty degrees, in winter the frost was below forty. A graduate of the capital's university began to work on a drilling rig. Very soon he became a senior drilling foreman. Incidentally, this very drilling rig, on which Dinmukhamed Kunayev and his comrades worked, is a historical monument today. It was on this installation that the foundations of the future smelting giant of Kazakhstan were laid. In 1937, Dinmukhamed Kunayev was already the head of the drilling and blasting workshop. And he made it the leading one. In parallel, despite the hard work, Kunayev enters the Komsomol, where he becomes one of its most active participants. He is not limited to the factory committee and becomes a member of the district Komsomol. And this is even more work. But he does not get scared. Before his eyes, not only an industrial enterprise is emerging, but also the city - Balkhash. In the same year, Kunayev joined the Communist Party. He does not forget about work either. In 1938 he was appointed to the position of chief engineer of the Kounrad mine, then an acting director. In November 24, 1938 Balkhash smelting plant produced its first copper. Another giant has appeared on the industrial map of the USSR.

The next year, Kunayev, during his first business trip, met his soul mate - Zukhra Sharipovna  in Alma-Ata, with whom he would never part.

He worked for a short time as Deputy Chief Engineer - Head of the Technical Department of the Ust-Kamenogorsk Altaipolimetal Plant. In 1939, he headed the Rudnensky mine. Attention to its products was the closest. World War II was already raging in Europe at that time, and it was rapidly approaching the borders of the USSR. The country needed zinc, lead and other metals. At the end of the pre-war 1940, Kunayev was appointed to the post of director of the Ridder Mining Administration, which combined all the mines, concentration plants and other industrial enterprises of East Kazakhstan. It was this post, he became aware of the news of Nazi Germany’s attack on the Soviet Union. The first year of the war was the most difficult, hundreds of male workers went to the front, and the country needed raw materials, but managed.

In April 1942, Dinmukhamed Kunayev became the deputy chairman of the Council of People's Commissars of the Kazakh SSR or vice prime minister. In this post, he was responsible for the entire industry of the republic. During the war, he had to be responsible for the construction of another large industrial facility - the Ust-Kamenogorsk Lead Plant. It was our republic that during the Second World War was the main supplier of manganese and copper for defense, we mined up to 60% of molybdenum, 65% of polymetallic bismuth, and all of 80% of polymetallic ores, began to mine coal 75% more than before the war, black gold - oil 2.5 times more.

PRESIDENT OF THE ACADEMY OF SCIENCES OF KAZAKHSTAN AND VIRGIN LAND

After the war, the experience and knowledge of Dinmukhamed Kunayev was already useful in a new position - the post of president of the Academy of Sciences of Kazakhstan. And for this post he was recommended by the former head of the Kazakh Academy - Kanysh Satpayev. Another work began, no less intense than in a high public office. The struggle was fought on an ideological front. During those years, many representatives of the Kazakh creative and scientific intelligentsia had suffered. K. Satpayev, M. Auezov, A. Zhubanov and others were subjected to hate campaigns in the press and repressions, albeit not as deadly as they were during the Stalin years. Many of them were forced to leave Kazakhstan to Moscow. Dinmukhamed Kunayev understood the injustice of what was happening, he actually had to remove many prominent writers and scholars from under the ideological fire.

The Academy itself was faced with the task of improving the research work in the republic. It was necessary to change the approach to work. This was demanded by both time itself and the state. The task was set for the academicians - to develop a comprehensive plan of measures for the implementation of priority tasks. Moreover, already in 1953 the party set the task of increasing grain production, which would require the development of virgin and fallow lands only within one year - 1964 - 1955, by more than 6 million hectares, and without the participation of the Academy of Sciences this task could not be solved. The scientific community were actively engaged, led by its president. They had to go around all the central and northern regions of the republic, to study the condition of the fallow lands on the spot, and not by map. The work done had borne fruit. The very next year, Kazakhstan completed the plan for the development of virgin land and gave the homeland a quarter of a billion pounds of bread. And this was 2.5 times more than in 1951.

AT THE POST OF THE HEAD OF THE REPUBLIC

In the mid-fifties, Khrushchev had already finally consolidated the power in the country to himself, getting rid of his rival, George Malenkov. In the USSR, the era came, as it was later called, the era of the thaw. It was during this period that Dinmukhamed Kunayev was appointed to the post of Chairman of the Council of Ministers of the Kazakh SSR, and Leonid Brezhnev was the first secretary of the Communist Party of Kazakhstan. It was then that their long-standing friendship began. During this period happened not only the virgin saga, but also the active construction of new industrial enterprises. Various ministries and departments appeared in the republic, such as the ministries of non-ferrous metallurgy, construction and installation works, energy, and geology. However, the main event in the life of the republic was still the development of virgin and fallow lands, which radically changed the socio-economic structure of Kazakhstan. On January 19, 1960, Dinmukhamed Kunayev was unanimously elected First Secretary of the Central Committee of the Communist Party of Kazakhstan, but two years later he was removed from this post and was appointed Chairman of the Council of Ministers of the republic. In Moscow, they were dissatisfied with Kunayev’s policies, which he tried to conduct regardless of the center. But two years later, the first secretary of the CPSU Central Committee, Nikita Khrushchev, was dismissed. This happened in October 1964, and on December 7, Kunayev was once again elected leader of Kazakhstan. Over the years of his leadership, the republic has finally become one of the key industrial, technical and agricultural sectors of the Soviet Union. Thus, from 1954 to 1984, the republic’s agrarians produced 600 million tons of grain, the average annual grain sales increased by 9 times compared to the development of virgin land, only in 1979, Kazakhstan’s agrarians gave the country more than 20 million tons of grain, almost two thousand state farms worked in the country. Almost half a million residents of the republics finally resolved the housing problem, the wages of collective farmers and workers rose. Kazakhstan confidently became one of the leaders among the Union republics.

In the second half of the 80s, a new era began in the Soviet Union - the era of Perestroika. The new head of state, Mikhail Gorbachev, sought to change the country. And he began by replacing the old leaders in the republic. In February 1986, Kunayev chaired the 16th Congress of the Communist Party of Kazakhstan for the last time, and by the end of the year, on December 16, for some 18 minutes at the plenum of the CPC Central Committee, he was removed from the post of first secretary of the Communist Party of Kazakhstan. However, Moscow appointed  the first secretary of the Ulyanovsk regional party committee Gennady Kolbin to this post. This provoked unrest among patriotic Kazakh youth, called Zheltoksan.

After his resignation, Kunayev lived in Alma-Ata. He died on August 22, 1993.

Dinmukhamed Kunaev enjoyed unconditional respect both among ordinary workers and collective farmers, and in high bureaucratic offices. He spoke to everyone in their language. He was notable for his special character, a respectful attitude to all with whom he spoke. And the memory of Dimash Akhmedovich, as he was respectfully called by the people, will forever remain in the memory of grateful descendants. Streets, districts, schools are named in his honor not only in our country, but also abroad.