From primitive tools to modern technology 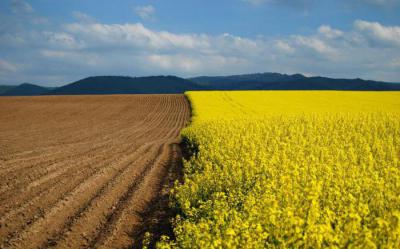 Mankind has been cultivating soil for over 10,000 years. Naturally, it is hardly necessary to speak about the use of agricultural tools at that time. At that time, people cultivated the earth with primitive devices. Often it was a wooden stick, which the first farmers "plowed the soil". But with the development of iron, such a stick was replaced by a plough, hoe, shovel that we already knew. Then, a man began to use domesticated animals for ploughing fields. Back in Ancient Egypt, they knew all the secrets of farming and irrigation. It was at this time - about 5000 years BC, many historians believe that a sedentary lifestyle has developed. Originally, the soil was cultivated with a hoe and plough. Then, as some historians suggest, around 1580 - 1090 BC in the era of the New Kingdom plough was improved, irrigation systems began to be built, thereby increasing the sown area. 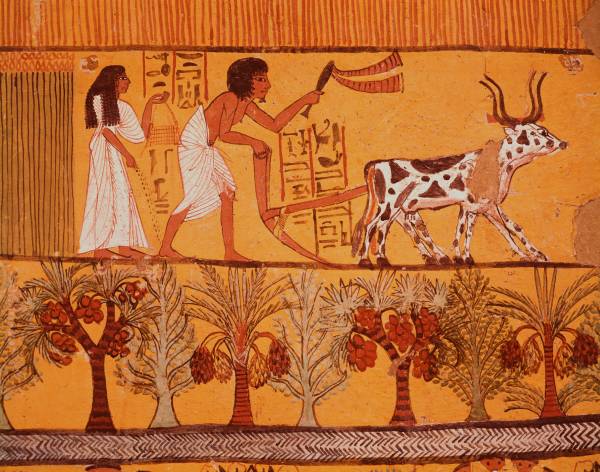 The first plough was a sharpened wooden stick with a rigidly reinforced drawbar at a certain angle. It was harnessed to oxen or donkeys. Though, as was said, the Egyptians improved the wooden plough by equipping it with an iron coulter. This allowed them to grow not only crops, but also whole vineyard plantations. In addition, horticulture was widely spread. A hoe has been used for loosening the soil since ancient times. It was a simple tool with a wooden handle and a sharpened metal tip. A few centuries later, the hoe was often only used for cultivating vegetable crops. But in order to level the ploughed field, ancient tillers used harrows that differed little from the modern ones. Over time, in some regions of the planet, they switched to the system of three-fields. In the beginning, the fields were winter, then spring ones, and the rest was left under steam. But this method of work showed its ineffectiveness. The triple-field system led to soil spraying and earth depletion. And the peasants started looking for a way out. And it was found. Fertilizer came to their aid, both organic and mainly manure, and inorganic - marl, which of course, increased yields several times. And this, in turn, made it possible to provide food from one field to twice as many people. And at the same time, labour costs were minimized. In addition, this method laid the foundation for the development of individual peasant agriculture.

As for field cultivation techniques, the main facilitator of the farmers at that time was loosening the soil. As the name implies, the soil was simply loosened without disturbing its layer. But already in the beginning of the nineteenth century, farmers have adopted a metal plough. And at the same time, principle of cultivation of soil changed. The plough cut the uppermost layer of the soil and upside down threw furrows to the bottom and filled it with new layer. This method, which literally turned the soil "upside down", did not have the best effect on the soil. On the one hand, the plough greatly simplified the work of peasants in the field, and on the other hand, it led to the deterioration of the soil structure, changed the living conditions of microorganisms necessary for plant growth. The negative consequences of ploughing in the fields include the fact that the soil was literally planted with weed seeds, which were almost impossible to get rid of later. In addition, wind and water erosion increased with this method of ploughing. But this did not particularly concern the peasants. Moreover, with the advent of the technical revolution, tractors started working in the field. Therefore, already in the beginning of the twentieth century, many agronomist scientists began to oppose ploughing in the fields. Among them, Russian agronomist AI Ovsinsky and American scientist farmer G. Faulkner. It was then that they began to move to a more gentle method of working with soil, the so-called dump-free tillage. What is its essence? The soil is treated as little as possible and only the topsoil layer is affected: three to seven centimetres. There was also a deep method, the same principle of minimum tillage, only the plough is followed by a chisel plough, and in another way the plough was deepened or slotted to a depth of 60 centimetres, so that autumn and spring moisture could be retained in the soil. But it is also impossible to say that this is the best way to cultivate the soil. It is admissible if there is a moisture deficit and it is not suitable for all natural and climatic conditions and soils. But it is specifically in our steppe and forest-steppe conditions that this method is the most optimal. But it's not just the technical issues that are important. The soil has to be treated by the next sowing campaign. For this purpose, farmers use organic and mineral fertilisers before driving the technology out into the field. The remaining plant residue, which by rotting, became also a kind of fertiliser. Another important factor that can influence the future harvest is the time, or rather the timing and condition, of the soil cultivation. For example, if the soil has been strongly compacted and subjected to water erosion and growth of weeds, farmers use post-harvest irrigating with deep subsequent ploughing. But if this does not help, then a heavy disc harrow can be used.

Over time, an even more gentle method of tillage has emerged - zero tillage or No-till. The traditional agricultural tool such as a plough has been abandoned. Since there is no mechanical impact on the soil, this method is also called the direct sowing principle, while keeping plant residues on the soil surface, crop rotation and crop exchange. Thanks to the innovative soil protection approach, the maximum effect is achieved.