The consequences of collectivization in Kazakh land 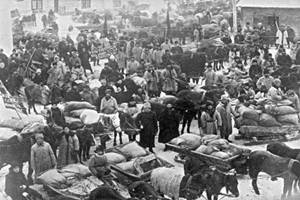 On the frosty December days of 1927, the Fifteenth Congress of the CPSU(b) was held in Moscow. The decisions that were made during the session had the most devastating and tragic consequences for the peoples of one sixth of the world. On the tenth anniversary revolutionary year in the USSR, the start of a collectivization program was announced. In the first country of workers and peasants, agriculture should be for everyone with no individual peasants. The socialist transformation of the Soviet countryside began. Collective farms began to appear. Already in the first year of collectivization in the Soviet Union, about a third of all peasant farms in the country were united into various forms of cooperation. Only in this way agriculture could provide the state with meat, bread and other food raw materials for the population of dozens of cities that appeared in the of years of industrialization. Indeed, in many respects the rapid development of the industry in the late 1920s and early 1930s was connected precisely with collectivization. In turn, the widespread introduction of technology into peasant labor freed millions of rural residents from manual labor. They were ready to provide work at enterprises and factories. And working hands were needed. Just at that time in the USSR, they began to implement the first five-year plans for the development of industry. Well, industrialization is impossible without foreign specialists and advanced technologies. For this money is essential. Where to get it? From the peasants. At first, grain was taken for export, and then with the help of collective farm production they were supposed to increase grain supplies to foreign markets. The funds received from this sale were used to purchase equipment for industrial giants under construction. In fact, for the state, grain export was the only source of foreign exchange. The construction of socialism in the countryside began at the most rigorous pace, and most importantly, cruel methods were chosen. It should be noted that in the late 1920s, 80% of the country's population lived in the village.

According to the plans of officials from Moscow, collectivization was supposed to end in the spring of 1932 in the republic. However, these plans did not apply to those areas where nomadic and semi-nomadic farming were developed. Here collectivization was supposed to end in 1933. Of course, this did not save them from excesses. On the collective farm, everyone was united, and compliance with the law was the least of their concerns. The main thing was not just to fulfill the plan, but to fulfill in excess. Thus, excesses began. In 1928, no more than 2% of collective farms were registered in the republic. The authorities began to rectify the situation. A year later, there were already more than 50% of them, and by the end of 1931 - about 65%. By this time in 78 regions of Kazakhstan out of 122, collectivization exceeded 70%, and in some places all 100%. Such rates could hardly be achieved by legal methods. Then the authorities organized the so-called Komsomol campaigns “for collectivization”. This work involved not only party activists, but also employees of industrial enterprises. Only about eight thousand people. Moreover, to call on the local population to unite in collective farms, workers were sent from other republics of the Soviet Union. They created collective farms according to the patterns by which collective farms were created in Russian and Ukrainian villages. Hundreds of farms within a radius of 200 kilometers or more gathered in one place, and then stationary towns were created not unlike the villages. At the same time, no one took into account local specifics. This led to the most tragic consequences for the nomads. In 1930, 87,136 households were transferred to a settled economy, and in 1933 already 242,208. Of course, people, in spite of all the appeals of the party, were in no hurry to join collective farms. Then the guilty were found. They were former "bai", prosperous individual peasants, called "kulaks", and those who sympathized with them were declared "podkulaks". Those times they knew how to find “enemies”.

The struggle against the prosperous peasantry

August 27, 1928 saw the light of the decree "On the confiscation and eviction of the largest Bai farms and semi-feudal lords." This document gave the go-ahead for confiscation of the Bai property, and the owners themselves were evicted. Eviction at that time meant condemning people to certain death. Three days later they adopted the “Instructions for the application of the decree of the Central Executive Committee and the Council of People's Commissars of KASSR on the confiscation of Bai farms.” This meant one thing - enforcing the fight against bais. Authorities declared socially dangerous those bais that had more than 400 animals in nomadic areas, more than 300 cattle in semi-nomadic regions, and more than 150 animals in settled ones. All their property was confiscated, and the owners were exiled. Almost 83% of the Bai farms were recognized as socially dangerous, and even more - 91% were hostile to the Soviet regime. However, in order to be a socially dangerous element, it was not necessary to have hundreds of cattle, this was left to the discretion of local authorities. In the autumn, the struggle intensified. On October 17, 1928, the CEC and the Council of People's Commissars of the Autonomous Soviet Socialist Republic adopted a decree “On criminal liability for counteracting confiscation and eviction of semi-feudal largest bai farms". Then the total confiscation and eviction of the bais began. However, this was only on paper, the middle peasants, who were grouped with the bais, were also subjected to repression. Central Commission for the confiscation of bai farms and the elimination of bai as a class was responsible for the implementation of the set tasks. It decided to eviction of 657 major bais. Within only one year, 1,027 bai farms were deprived of their property, 145,000 livestock were seized, and agricultural equipment was taken. Confiscated cattle and property were transferred for use to 25,061 poor households and were also redistributed between collective farms. Which meant their actual death. Collective farm cattle, that is, public cattle, and therefore no one's, were herded to the so-called farms, which are simply enclosed plots in the steppe. By the beginning of the thirties, more than 56 thousand peasants were brought to justice and more than 34 thousand were convicted. In 1931, 5,500 families were evicted.

This ill-conceived policy of the authorities led to the opposite result. In the early thirties, there was a sharp decline in productivity. During the first five-year period, the share of the republic in grain production across the country decreased from about 9 to 3%. However, the worst consequences were in regards to livestock. If at the end of the twenties in the republic there were 40.5 million heads of cattle, then as of January 1, 1933 there were only about 4.5 million heads of cattle. 87% of collective farms and almost 52% of individual farms completely lost their livestock. This led to the worst tragedy in the history of the Kazakh people - the famine of 1930-1932. In two years, the Kazakh people lost - 1 million 750 thousand people to hunger and disease, and this is 40% of the population of the aul. People sought salvation in a foreign land. A massive outflow of the local population began. Over one million nomads migrated to China, Mongolia, Iran, Afghanistan, also the countries of Western Europe, 616 thousand never saw their homeland, and 414 thousand returned home.

There were armed protests against the policy of forced collectivization. In one of the largest of them - the Karakum uprising, more than 5,000 people participated. It was attended by residents of the southern, central and western regions of Kazakhstan. People asked to stop forced collectivization, to return confiscated cattle and property, to return illegally convicted peasants from exile, and finally to allow local residents to create collective farms themselves, on a voluntary basis. Naturally, the authorities did not even talk with the rebellious people. The uprising was suppressed by the 8th Orenburg Division. 175 people were sentenced to death, 172 participants were sentenced to a forced labor camp for a period of 2 to 10 years, and some were sent to Siberia. Resistance swept almost all of Kazakhstan. From 1929 to 1931, 372 uprisings were registered in the republic, in which about 80 thousand people participated. Unrest was suppressed in the most brutal way. The authorities attracted regular troops. 5,551 people received long prison sentences, 883 of them were sentenced to death - execution. In total, during this period, more than 100 thousand residents of Kazakhstan were subjected to repression of the authorities to one degree or another.