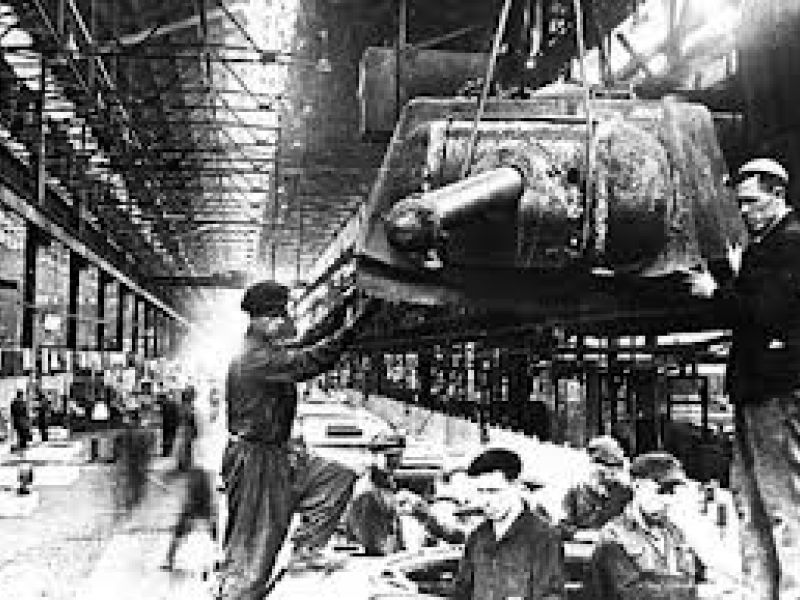 In the pre-war years Kazakhstan, like the entire Soviet Union, was preparing for the coming war. Yes, they did not officially and openly talk about it, but according to people's memories, the feeling of the upcoming war in those years was literally buzzing in the air. In 1939, at the XVIII Congress of the Communist Party of the USSR the third five-year plan for industrial development was adopted, which contributed to strengthening the defense capabilities. Incidentally, the implementation of this plan was in the early years of the Great Patriotic War. Kazakhstan was given a role of a large industrial center in this program document. By 1940, the share of industry in the economy of the Kazakh SSR was 60%. For twenty years of the Soviet power in the Kazakh SSR more than 2500 different large enterprises were opened. Brand-new production was launched in the republic, new mines were developed, transport and logistics infrastructure was developed, and already existing plants and factories underwent major modernization. The Republic, as well as the whole country, was flooded with a wave of construction.

In 1938, the country received the first copper from one of the largest copper smelters of that time, the Balkhash Copper Smelter. Such plants as Chimkent, Achisaisky and Leninogorsky significantly increased their output. In 1938-1941, the Karsakpai copper smelter was modernized. More and more settlements of Kazakhstan were electrified. For this purpose, one of the first large heat and power plants in Balkhash was launched. In 1937, the Ulba hydroelectric power plant was launched. At the same time, construction of the Ust-Kamenogorsk HPP and the Karaganda HPP began in the centre and east. In 1940, the first stone was laid in the foundation of Aktobe Ferroalloy Plant. Also by 1940, our republic had already given the country 87% of all lead and 21% of all copper produced in the USSR. Owing largely to the launch of industrial giants in Kazakhstan, the Soviet Union was able to refuse to import many metals important to the country. The country, which was preparing for the coming war, needed these metals like air. In general, in the third five-year plan in the development of the national economy stakes were placed on increasing production of alloyed and high quality steels, light and nonferrous metals. By the volume of output of the coal Kazakhstan took the third place in the USSR.

Development of transport and logistics infrastructure in the Kazakh SSR

The development of industry without quality road arteries is impossible. This problem was solved by the authorities. By 1940, thousands of roads had already appeared in the republic. One of the grandest in terms of length was the highway Akmolinsk - Kartaly. Its construction was completed in less than nine months, and its total length exceeded eight hundred kilometers. Dozens of challenges were solved with its construction. One of the main was reduction of the route of transportation of Karaganda coal to Magnitogorsk by five hundred kilometers. Practically at the same time in the West of Kazakhstan no less grandiose construction was underway. Road builders have put in operation highways Guriyev - Kandagach, Kandagach - Orsk, and in East Kazakhstan have commissioned highways and gravel roads of more than eight hundred kilometers in length, the so-called "Eastern Ring". As for development of transport and logistic infrastructure of the republic in the pre-war period, it is worth mentioning such highways as Alma-Ata-Sary Ozek, Jambul-Alakol. In total, 2681 km of railways were built in Kazakhstan during the first years of the third five-year plan, 1358 km of which were put into operation.

On the eve of the war, about 70% of the republic's residents were villagers. The main suppliers of agricultural products were collective farms. There were almost seven thousand of them registered in Kazakhstan. The number of state farms was much smaller - 194. The situation in agriculture is also changing. Yes, workers of the village still could not leave their places of residence, the size of homestead lands and personal herd were limited. And these changes were for the better. By 1940, Kazakh collective farmers had raised about 333.2 thousand hectares of virgin lands. However, this was not enough. Sown areas reached 5.8 million hectares, and the population of all kinds of animals - about 3.5 million heads. It was necessary to expand the cultivation areas for the development of animal husbandry. On 20 April 1940, the Central Committee of the All-Union Communist Party of Bolsheviks and the USSR Council of People's Commissars published a resolution "On further growth of grain farming in collective and state farms of the eastern regions of the USSR...". In the document, it stated about necessity to increase sowing areas by the end of 1942 on 4345 thousand hectares, mainly due to ploughing of virgin and fallow lands in Akmola, Pavlodar, North-Kazakhstan, Kustanay, Semipalatinsk and East-Kazakhstan regions. Moreover, these indicators were achieved. During the first three years, the areas under crops in Kazakhstan exceeded 6.8 million hectares. Over three years, the area under forage crops has increased by more than 2.5 times. In addition, in the south of the republic new branches of economy emerged at this time, among them rice farming, beet and cotton farming.