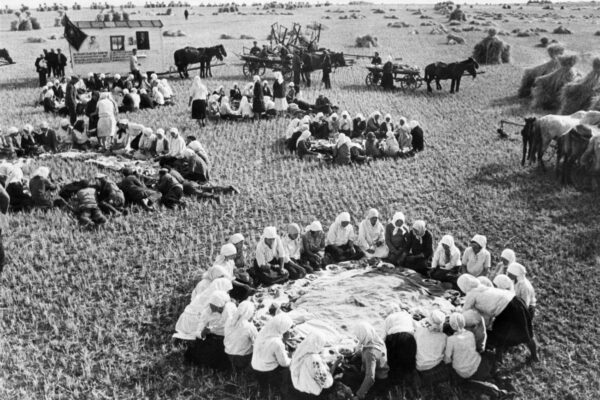 The years 1867-1868 were the years of transformation of the traditional nomadic economic and household way of life, formed by centuries. Since this period, one can say that capitalist relations began to emerge in Kazakhstan. The so-called Steppe Commission, established by the Tsarist government to carry out reforms in Kazakhstan, developed a document "Provisional Regulations", which determined the development of the Kazakh people in the late XIX century and early XX century. The most important point about this document is the announcement made by officials in St. Petersburg that all lands that used to belong to the steppes now belong to the state. Thus, the green light was given to seize land from Kazakhs not only for peasant settlers from the European provinces of the Russian Empire, but also for the construction of military fortifications, cities, plants and factories. The latter became especially popular in Semirechye. The region had not only an advantageous position, neighboring with the Central Asian states, China, and this was also a good source for trade development. In addition, the region was of special interest to minerals and animal husbandry, which were of interest to the Russian market. And most importantly, what should be said about the changes that took place at that time in the traditional way of the Kazakh people.

In all regions of the Steppe region agriculture was being developed. Immigrants have played a considerable role in this process. These figures indicate the growth of agriculture. Only within thirty years from 1880 to 1910 in Semirechye sowing areas increased by 4.5 times. Mainly, it developed in Vernensky and Kopalsky uyezds of Semirechye region. The growth of lands, which were cultivated by people, was promoted also by the fact that steppes, which were traditionally engaged in nomadic agriculture, moved to sedentary or semi-sedentary farming. Mainly, the Kazakh population cultivated barley and oats. In particular, this was the case in Kopal, Lepsin and Jarkent counties of the Semirechye. If sowing increases, it means that new agricultural tools appear. And at times the demand for new, improved agricultural tools was so great that in some districts of the same Semirechye region it was impossible to meet the growing demand. The plough was especially popular. The economic factor also played its role in equipping new farmers with irreplaceable equipment. Sometimes, families could not afford to buy a simple metal plough. And this, in turn, influenced the equipping of entire farms with necessary tools. Sometimes, the poor had to borrow a plow from their richer neighbours. If one to consider the Smerechinsk region, in some counties these figures barely reached fifty percent. Thus, Kazakh farms in Lepsinsky county were equipped with 50.19%, in Kopalsky - even less - 48.48%, and in Vernensky - 44.26%.

Nevertheless, in some regions, primarily due to natural and climatic conditions, the nomadic economy was still developed. More than half of the indigenous population of that time lived in such economic activity. By the beginning of the twentieth century, nomads comprised a population of over 130 townships, or 0.8-1 million people. Most of them were in Mangyshlak, Atbasar, Kazalin and Temir districts. It must be noted that it was not the nomadic cattle breeding that was widespread during this period, but the so-called extensive semi-nomadic cattle breeding, i.e. pasture and semi-secret keeping of domestic animals, as well as farming, haymaking. During winter they began to stay in one place more often, and permanent houses also began to appear. In spring, summer, autumn and the first period of winter such semi-nomadic farms kept cattle on the pasturage, but with the onset of winter, the cattle were driven into the stall and fed the hay harvested during the summer. It was haymaking that became the hallmark of such economic activity in the late nineteenth and early twentieth centuries. In addition, semi-nomadic farming also meant farming. Of course, Kazakhs have been engaged in farming for a long time, but it was mainly the inhabitants of the southern regions, but this is where it became widespread. As a result, semi-nomadic Kazakhs began to keep more cattle. The cattle began to be used, as well as tractive force in sowing operations. The development of trade, more precisely the increase of meat market, also played its role. Sedentary cattle breeding was also developed. First of all, in such districts as the Urals, Kustanai, Aktobe, Petropavlovsk, Akmola, Ust-Kamenogorsk, Semipalatinsk counties, Southern Kazakhstan as well as in Semirechye. They lived as farmers and, consequently they kept fewer domestic cattle and more breed cattle.