The state of agriculture during the Great Patriotic War 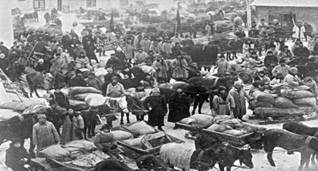 The country shifts to a war economy

More than 70 million hectares or about 40% of the total cultivated area of the country of the Soviet Union during the Great Patriotic War were under German occupation. This forebode a real collapse for agriculture throughout the USSR. Something had to be urgently done to save the situation. A way out was found in the east of the country. In the vast expanses of Kazakhstan, the lands of Siberia, the Volga region and the republics of Central Asia. From the first days of the war, the Party and the government took special measures for the further development of agriculture in the Union’s unoccupied territories. A month later, after the outbreak of the war, on July 20, 1941, they approved a plan to increase the winter wedge of grain crops in Kazakhstan, the Volga region, Siberia, and the Urals. The peasants of these regions shifted to war economy.

Intense battles went not only on the frontlines, but also in the deep rear. The main tasks for agriculture of the Kazakh SSR were set at the V plenum of the Central Committee of the Communist Party of Kazakhstan. This meeting, where historical decisions were made, took place in difficult conditions, despite the fact that the front was a thousand kilometers from the country, the whole burden of the war fell on every citizen of the republic. For 1941-1942 the rural population of the republic decreased by almost 600 thousand people. The collective farms and state farms themselves began to live almost according to the laws of wartime. Thus, on the collective farm “Krasnye Gornye Orly” of the Urdzhar district of the Semipalatinsk region, most of the men went to the front. Several leaders remained, while others went to work in the fields. Having mobilized all their forces, the villagers increased production standards by almost 25%. This became an example for all collective farmers of the republic. An employee of the Kurman collective farm in the Aktobe region, Sh. Bersiyev, has bred a new drought tolerant high-yielding variety of millet and set a world record. In many villages, the Stakhanov movement began. All worked to obtain high yields. A large rice crop was received by one of the best rice growers in Kazakhstan - I. Zhakhayev and Kim Man San. In 1942, Kim Man San managed to collect 154.9 centners of rice per hectare, and already in 1943 I. Zhakhayev brought these figures to 172 centners per hectare.

“Everything for the front! All for victory!”

For all the years of the Great Patriotic War, peasants of Kazakhstan gave their homeland more than 30.8 million pounds of bread, almost 15 million pounds of potatoes and vegetables, about 16 million pounds of meat. Such impressive results were achieved due to the rapid development of the virgin lands of the republic. Already in 1942, almost 450 thousand hectares were developed in Kazakhstan, and the cultivated area increased by 17 percent. Winter crops, millet, and beets were increased. In the early years of the war, 1.2 million heads of cattle was taken to Kazakhstan from the occupied territories of the country. Starting from 1943, the republic began to return livestock for the liberated regions of the USSR. Over the five years of the war, livestock in Kazakhstan increased by 397 thousand heads, sheep and goats - by more than 3 million, and horses - by 95 thousand heads. Today it is not proper to recall, but during the years of World War II, our republic took patronage over the Orlov region of Russia. By the end of 1943 and early 1944, Kazakhstan collective farmers sent more than 11 thousand heads of cattle, almost 74 thousand sheep and goats, 18 thousand pigs to the liberated from Nazi occupiers Orlovschina. Although at this time, our breeders were experiencing great difficulties. The multimillion livestock had to be fed with something. With what though? These tasks they had to solve during difficult military conditions. The centuries-old experience of Kazakh livestock breeders came to the rescue. Peasants began to use distant pastures.