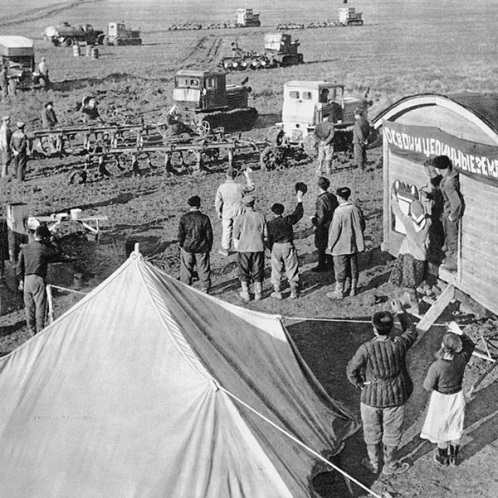 The Virgin soil. In the mid-fifties, this purely agricultural term gave rise to the whole generation - the generation of the people whose mission was to become the earliest explorers. The Virgin Lands have predetermined the life experience of hundreds and  thousands of young adults. In spring of 1954, yesterday's pupils and students being anxious to be helpful to their homeland, went to Kazakhstan to develop the Virgin Lands. Noone knew what awaits them in the unknown Kazakh steppes. Still they did not think about the difficulties. And today it sounds somewhere naive and even pompously, but this is the truth of life.

To say that it was difficult is to say nothing. Only yesterday they were surrounded by home comfort and parental care, and today they found themselves in the steppe blown by the wind. The virgin lands pioneers have experienced the greatest difficulties: uncomfortable living, life in trailers and tents. No elementary benefits of civilization. According to the people's recollections, it was missing the most elementary things such as beds, mattresses, pillows, dishes and food. And despite all these difficulties they had to work throughout the day and night forgetting about tiredness, lack of sleep, exhausting summer heat and severe frosts in winter. The country needed such vital bread from the undeveloped virgin lands. And it was needed in the shortest possible time.

From the comfortable Moscow…

Nikolai Vorotyntsev was among those who arrived in Northern Kazakhstan as part of the first brigades. The young man arrived on June 25, 1954 in the unknown Kazakhstan. But many others who came to the republic to open up the virgin lands could not stand the difficulties and went back home. The graduate of the Moscow University with honors diploma has left here. The young engineer was dispatched to the international support and demonstration MTS (machinery and tractor station) which was based in the Mamlyutsky region of the North Kazakhstan oblast. Many virgin lands pioneers had to pay the high price for their labor feat. It was quite common the cold-related diseases caused by the cold weather and living in the unheated shelters. But was it a case?! Every single morning of Nikolai Semenovich was right the same as previous in the field.  And the working day ended far in the dark just there in the field. But our hero never expressed a single complaint at that time. On the contrary he repeated over and over again that it was the one of the happiest stages in his life.

And the year later, on a hot August day, Vladimir Koryabkin, the regular Moscow guy, Vladimir Koryabkin got on the train on his way to Kazakhstan. The young man being at the graduation course of the legendary Timiryazev Agricultural Academy firmly has decided to go to Kazakhstan. Well, how could it be otherwise if the song “New settlers are coming across the virgin land” could be heard from everywhere.  After graduating the university with honors in 1955, he followed his dream-to change the steppe. And on September 2, Vladimir Koryabkin and a hundred of his agemates arrived by train to the Kokshetau railway station. It took four days. The very next day, he and his friend went to the Schuchinsky region, their new workplace as agronomists. As he said, he arrived on the virgin lands the year later, after the slogan "The Virgin Lands Campaign" was spread the word. They came to the Vedenovskaya MTS, Kokshetau oblast, the settled area whereas in contrast their precursors were brought into the bleak steppeThey had to go through the virgin difficulties living in the slitted plank wagons blown by the wind unlike the present solid houses. But they weathered the storm. From all over the Soviet Union more than 120 thousand young men and women arrived in Kokchetav Oblast during that years in total. Vladimir Koryabkin, the author of the book “The Virgin Lands Campaign” gives the definition for the virgin lands pioneers where he suggests to divide them into two groups - the virgin land pioneers which had to build the new villages in the bare steppe experiencing the incredible difficulties. He had a chance to work with these pioneers. He preserved the memories about them with the gratefulness. Vladimir called the second group as the virgin lands settlers which continued to follow in the footsteps of the virgin lands pioneers. And he considered himself to be one of them. He did not back to Moscow, he left to work in Kokshetau where he gained the second homeland and got married.

It is widely accepted that the eared virgin fields in the Kazakhstan steppes have appeared within three to four years but it is nothing near so. This process lasted more than one decade. It has passed more than sixty years since that time. It has been harvested almost 3.5 billion tons of wheat within the development of the virgin and unused lands over the years. It has been established more than 330 state-owned farms in our republic; about 300 thousand people finally became the owners of their houses.