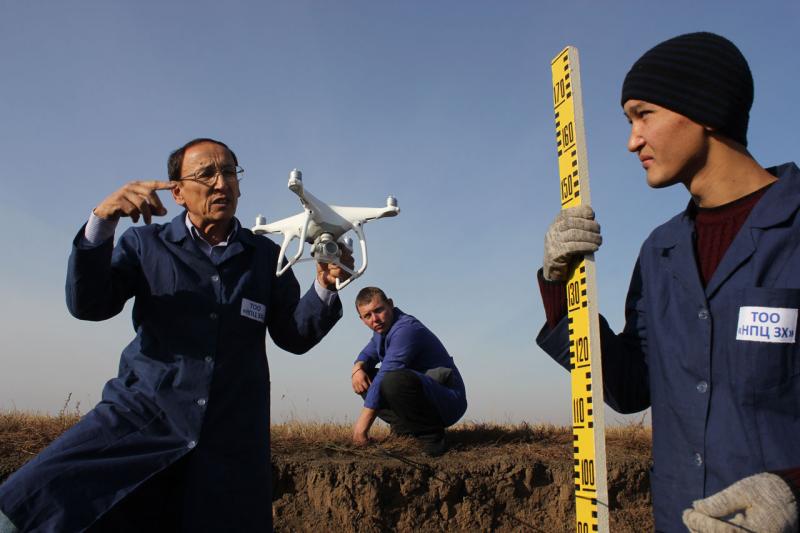 The 65th anniversary of the Scientific and Production Center of Grain Farming named after Alexander Barayev, known for its scientific developments far beyond our country, fits in the sequence of significant events of this year quite remarkably. The World of NAN portal presents an article by N. Serekpayev, Chairman of the Board of Barayev Scientific and Production Center of Grain Farming LLP, to the attention of its readers. The history of the Centre dates back to the beginning of its existence.

The history of the center dates back to February 14, 1956 when by the Decree of the Council of Ministers of the USSR and the Central Committee of the CPSU Kazakh Research Institute of Grain Farming located 60 km from Akmolinsk on the basis of Shortandy agricultural experiment station was founded.

A whole army of scientists, a huge amount of human and material resources and equipment were rushed into the virgin lands to develop large areas of land, to breed new varieties of crops. It was truly a great era of grain farming. And in this gigantic work the leading role was played by talented and prominent scientists who realized the grandiose breakthrough project of the twentieth century. The first of them was Alexander Barayev, academician, luminary of Kazakh agrarian science, who headed the Grain Institute from 1957 to 1985.

The Institute then served as a zonal scientific research institution within the system of the Ministry of Agriculture of the Kazakh SSR, then as part of the Kazakh Academy of Agricultural Sciences. And in 1961, given the scale and importance of food security of the country, the Institute was given the status of the All-Union Scientific Research Institute of Grain Farming (VNIIZKh), which greatly expanded the scope of the Institute, and increased responsibility for maintaining the fertility of millions of hectares of land. 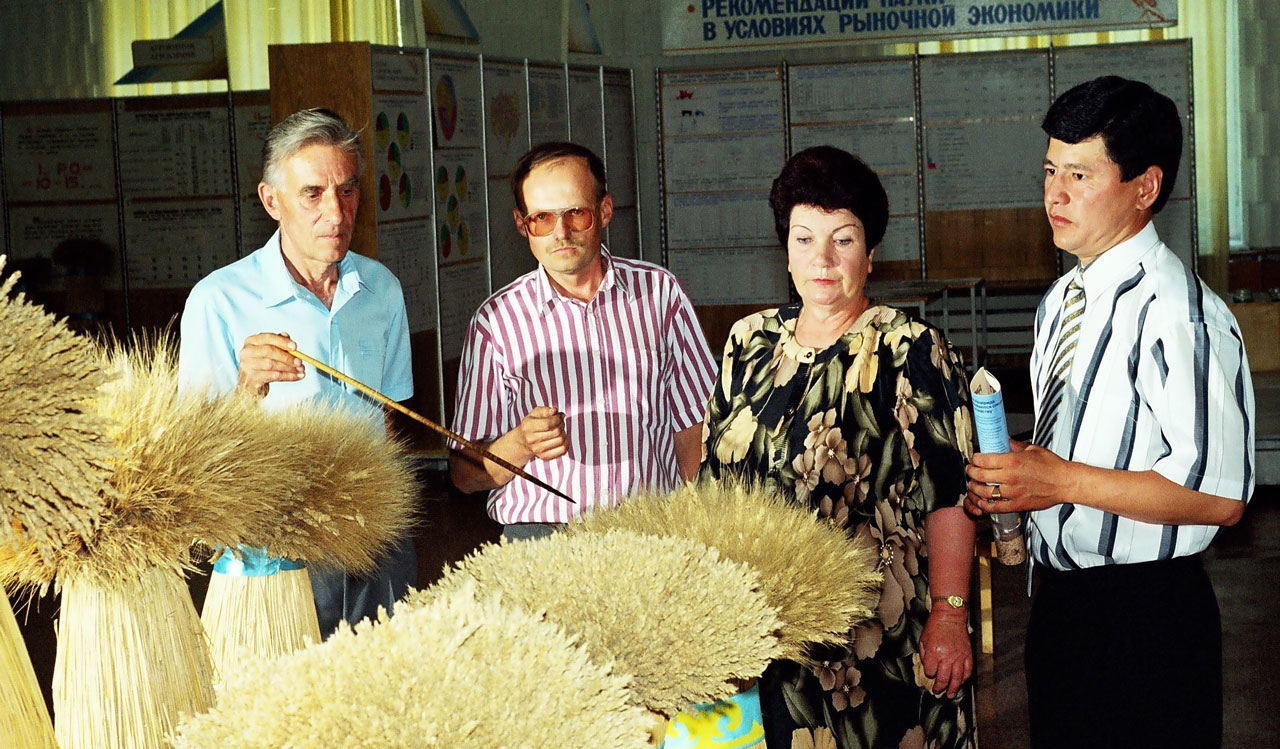 Few people know that the period of organization of the institute coincided with the catastrophic spread of wind erosion in the newly developed virgin and fallow lands of Northern Kazakhstan due to mass plowing of steppes, which caused undesirable consequences. The team of scientists and workers of the institute faced a huge task - to immediately develop soil-protective system of agriculture. It was also necessary to increase grain production, radically change the methods of tillage and develop a system of new machinery and equipment.

Day and night the scientists and ordinary employees of the institute toiled, sparing no effort and not taking into account their personal time. As a result, the team developed and introduced the conservation agriculture on the area of more than 60 million hectares of virgin lands. At that time it was a very advanced technology, the basic elements of which remain fundamental for development of modern systems and technologies.

After the introduction of new technologies, the growth of grain production began. For example, its average annual production in 1961-1965 reached 14.5 million tons, and already in 1976-1985 was brought up to 27 million tons.

All these scientific achievements made it possible to make a qualitative and quantitative breakthrough in the 60's in solving the bread balance of the country, to take a leading position in the production of soft and hard varieties of strong wheat. Along with the improvement of farming technology at the Institute actively developed another important direction - plant breeding. Its history in Northern Kazakhstan is associated with the name of a talented scientist, breeder, academician Valentin Kuzmin. It was he who laid the theoretical basis of practical breeding for the steppe regions of the USSR back in 1936. Thanks to Valentin Kuzmin, dozens of varieties of grain, legume, oilseed and forage crops were bred, all of them were in demand in production, and became the gene pool for creating new drought-resistant varieties.

For the first time in the history of agricultural science in 1972 a group of scientists at the Institute, headed by its director Alexander Barayev was awarded a high state award - the Lenin Prize, then the whole world knew about Kazakhstan's flagship grain farm - VNIIZKh.

In 1988 a group of scientists of the institute was awarded the USSR State Prize for the development and implementation of a complex of anti-erosion machines.

Later the staff of the institute under the leadership of academician Mekhlis Suleimenov, the first laureate of the Presidential Prize of Peace and Spiritual Accord, developed the scientific basis for intensive technology of spring wheat cultivation and proposed a new development concept.

In 2007 the institute was transformed into "Scientific-Production Center of Grain Farming named after A.I. Barayev" LLP of " KazAgroInnovatsiya" JSC. This was a new period of development of the center, which coordinated the research work of 11 research enterprises, experimental stations and higher educational institutions of the Northern and Central Kazakhstan.

Vivid pages in the history of agricultural science of the country were written by outstanding scientists. They not only studied but also made discoveries which became known both in Kazakhstan and far beyond its borders. These are academicians and scientists: Alexander Barayev, Valentin Kuzmin, Alexandra Zaitseva, Ervin Gossen, Mehlis Suleimenov, Vladimir Movchan, Valery Kirgashin, Pavel Kolmakov, Alexander Buryakov, Zheksenbai Kaskarbayev, Akhylbek Kurishbayev and many heads and workers of the center. Their experience, scientific achievements are a reliable basis in the work of researchers of the new generation. It is no coincidence that the names of each of them are inscribed in gold letters in the history of agrarian science of independent Kazakhstan. 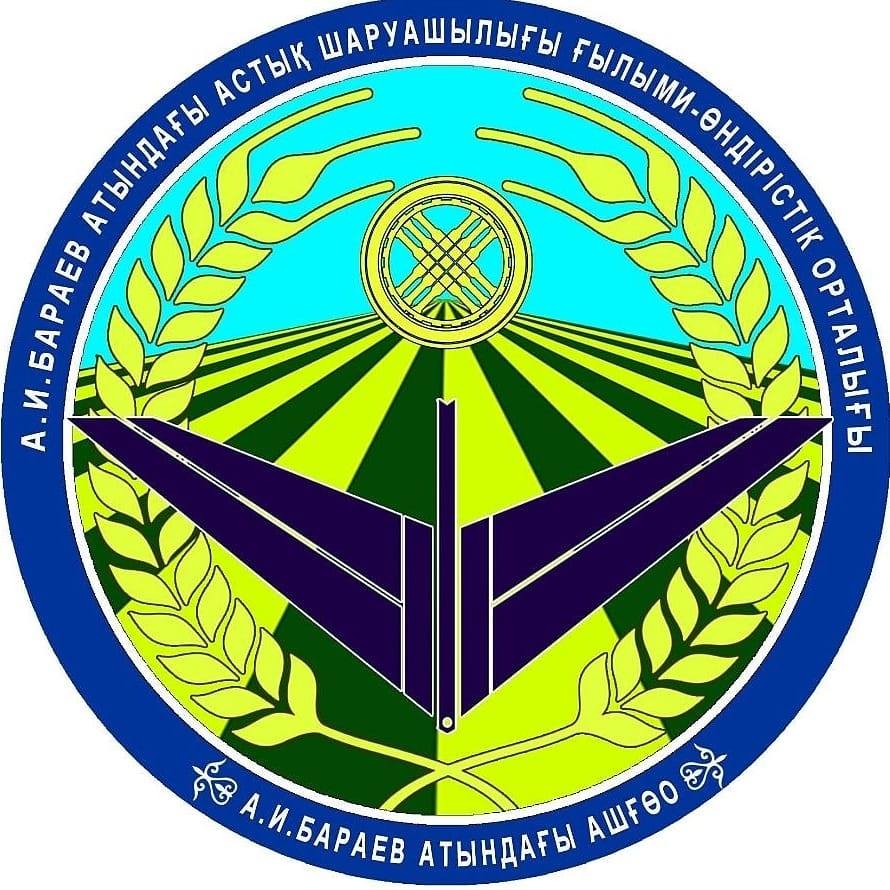 Today the Center is the leading scientific organization on the systems of precision and organic farming and crop breeding in the country, and makes all efforts for its further improvement and development.

And today, in accordance with a new concept of diversification of crop production breeders center continue to work on creation of promising varieties of peas, lentils, chickpeas, soybeans, safflower, genetics and other varieties of leguminous crops and oilseeds. All these measures allow Kazakhstan to remain one of the important exporters of grain and flour.

With the introduction of digital technology, a significant vector of development was determined on the basis of the use of new technical means and elements of precision (precision) farming on the basis of the Barayev Scientific and Production Center of Grain Farming, where a pilot project using elements of precision farming on an area of three thousand hectares is being implemented for more than three years. The project control center maintains a register of fields, interacts with "smart" equipment, documents the production process, conducts agroscouting based on the results of agrochemical survey of fields, satellite and weather monitoring of crops. Smart farms and electronic maps are also in pilot mode. And the results of this work are obvious: already today we can state the increase of productivity and environmental friendliness of production, reducing the use of plant protection products, increasing the efficiency of fertilizers.

LLP "Research and Production Center of Grain Farming named after A.I. Barayev" - the only institution in the country, which is engaged in applied research in the development of cultivation technologies of cereals, legumes, oilseeds, forage crops, the creation of new original varieties. And the success of the center is dictated by its equipment. The availability of modern seeding complexes, combines, perennial stationary on crop rotations, tillage, fertilizers, plant protection allows to achieve the expected results.

Today, being part of the NAO "Kazakh Agricultural University named after S. Seyfullin," the staff of the Research and Production Center of Grain Farming named after A.I. Barayev performs no less global tasks, following its mission: providing accelerated scientific and technological development of agro-industrial economy of Northern and Central Kazakhstan through diversification of crop production, creation of high-quality and competitive varieties, development and introduction of innovative resource-saving agricultural technologies and provision of scientific and educational services.

It is especially worth to note, that all scientific activity of our center, as in mirror, is reflected on sowing areas as in our region, and beyond it. In recent years, techniques have been developed on effective implementation of precision farming tools in the production of crops, recommendations on cultivation technologies on the principles of organic farming, which in the future will increase the profitability of production of environmentally friendly products by 25-30%. Soil-protective minimum and no-till technologies in fertile crop rotations, which ensure conservation, restoration of soil fertility, getting a high quality yield and cost reduction by 30-40%, with reduction of applied technical means from 10-12 units to 3-4, which corresponds to the global trend of agriculture development, have been improved. To date, spring wheat varieties of the center in the general structure of crops of Kazakhstan breeding varieties occupy more than 60%. In elite-seed growing, seed growing, individual farms scientists lay down demonstration experiments of new varieties and perspective lines, which allows agricultural producers to choose more competitive variety by itself, to take part in creation of variety, as it is accepted in advanced grain-producing countries of the world.

Nurlan Serekpayev, Chairman of the Board of "Research and Production Center of Grain Farming named after A.I. Barayev" LLP. Doctor of Agricultural Sciences