Last year, farmers in the southern regions of the country, in particular Turkestan region, faced water shortage. Lack of life-giving water threatened the villagers with loss of crops. Specialists, among other duties, had to engage in mechanical cleaning of canals, as internal irrigation systems were clogged with garbage and grass, and, as a consequence, water levels began to drop. With great difficulty and patience the farmers still managed to get the harvest. One can only wonder how this season will go. After all, experts say that Kazakhstan has been in a cycle of low water over the past 3 years. This information is confirmed by "Kazvodkhoz", noting that the total river flow in 2019 was 83 km3. And this is 20% less than the average annual figure.

Vladimir Starodubtsev, Doctor of Biology, Professor of the National University of Bioresources and Nature Management of Ukraine, who studied the problem of salinity of soil in Kazakhstan and the lack of water reservoirs during the virgin campaign is well aware of the situation in our country. In addition the scientist has the opportunity to receive and personally study space monitoring images. That is why World of NAN asked the professor for a comment on the situation with precipitation in Turkestan region, which may further affect the growing season as a whole.

According to the scientist, by the beginning of March information on accumulation of moisture and water runoff in the rivers was not very comforting. Thus, in the basins of the Arys River and the rivers of the southwestern slopes of the Karatau mountain range the amount of precipitation for the winter was (according to Hydrometeorological Service) about 60% of the norm, and the water reserves in the snow - about 50-70%. However, there was significant precipitation during the month. Snow fell in the mountains and snow cover increased from 2 to 8 percent. And on the slopes of the mountains there were heavy rains, as a result of which (according to KazHydroMet) water levels in the rivers Arys, Borolday, Bugun (Bogen) increased by 25-30 cm. Meanwhile the space image on April 14 showed that the situation at Bugun reservoir is getting more dangerous. Erosion-prone parts of the banks can be seen on the images below. 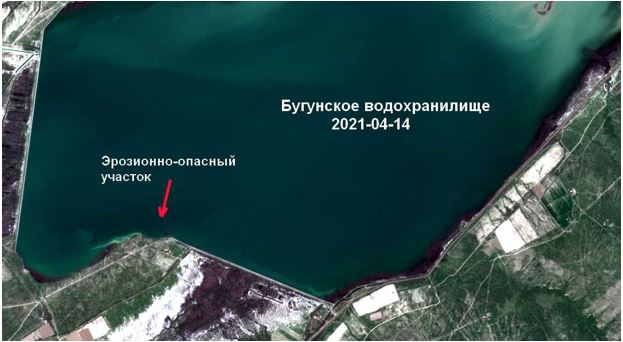 More optimistic data on the Syrdarya river watershed, but even there the reservoir filling is somewhat behind the usual levels for this period, says the expert. Thus, at the moment, we can say that water availability of the region is improving, if there are no strong floods on the rivers. Definitively the situation will be clarified only by the end of April, the expert believes.

With regard to data of space monitoring, according to Vladimir Mikhailovich, the most acute situation (excluding spring precipitation) is in Arys-Turkestan (Figure 1) and Shaulder massif, where the flow forecast (according to data published in the Internet) is 9.8-25.0 m3/s and the norm about 46 m3/s. Not much better flow forecast and the river southwestern slope of the Karatau Ridge - 4.8-10.3 m3/s, the rate of 18 m3/s. Nevertheless, the filling of Bugun reservoir is successful, says the scientist (Fig. 2). But during the filling of the reservoir, according to V.Starodubtsev, there is an erosion of its southern bank, so protective measures are needed, especially in the areas of the western edge of the Karazhantak and the southern edge of the Bugun dams.

In scientist's opinion, the first priority measure in conditions of possible low water availability should be operative elimination of unproductive water losses on main canals, on distributors and at water outlet to fields (Fig.3). In the future, as the deficit of irrigation water here will increase, it is necessary to reduce water losses all the way from the distributor to the field.

"It is absolutely unacceptable, when only about 50% of water taken from the canal reaches the field directly, and the efficiency (coefficient of performance) of irrigation systems does not exceed 0.65", - summarizes Professor Starodubtsev. 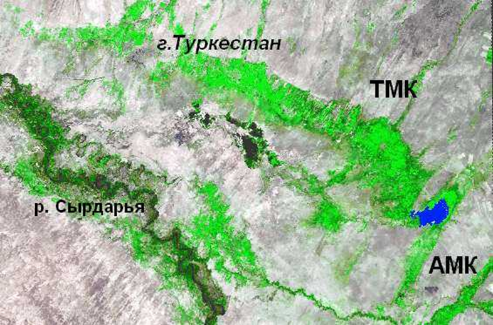 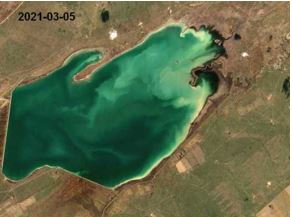 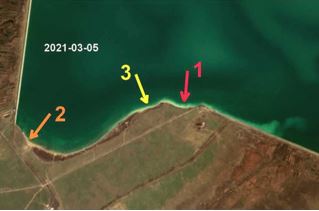 Fig.2. The filling of the Bugun reservoir and riverbank erosion 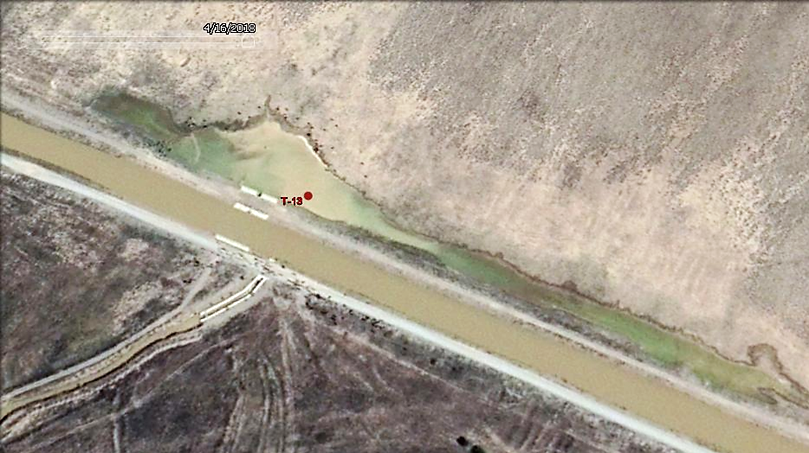 We received first-hand information from Askar Kystaubayev, head of the water use department of the Turkestan branch of RSE Kazvodkhoz, who confirms the fact of low water levels.

"This year in the region, according to advisory forecasts of RSE Kazhydromet, the water supply will be about 70%, that is, at least 30% below the norm. In general, the number of rivers in the region is decreasing and they are drying up. If more than 10 years ago we had 183 rivers, now we have 122 left. This adversely affects the volume of water resources in the region," Kystaubayev says.

Meanwhile, there are more than 300,000 hectares of irrigated land in the region.

The largest reservoir of the region is Shardara reservoir, as well as Koksarai counter-regulator. At the moment, according to the head of the water use department, 5 billion cubic meters of water have been accumulated in the Shardara reservoir and about 2 billion cubic meters of water in the Koksarai counter-regulator is planned to be accumulated for the growing season. Another 15 other reservoirs have collected 31% of the designed volume of water.

At the same time, the Koksaray counter-regulator works in 2 directions: in winter as an anti-flooding - along the Syrdarya River in Kyzylorda region the ice cover is accumulated, due to which today water is collected in the Koksaray basin. This allows providing water during the growing season for rice crops in Kyzylorda region. On Shardara, Arys, Otrar, Zhetysay and Maktaaral districts the growing season has already begun. And, as you know, the last two areas are among the most important in the agricultural sector of the country, it is 136 thousand hectares of irrigated land.

Given the forecasts of experts, this year we should apply maximum water rotation through irrigation systems, reduce water-loving crops, including rice and gourds, says A. Kystaubaev.

The expected low water level in the southern districts is confirmed by experts from Uzbekistan.

"The filling capacity of the largest river in Kazakhstan - the Syr Darya - depends, among other things, on the level of the Toktogul Reservoir. Now it has 8 billion cubic meters of water, with a design capacity of 19 billion cubic meters. It is known that in 2020, the region also had low water levels, and the water deficit was 30-35%, i.e. the water supply was about 70%. Then we all mobilized, took the necessary measures, carried out water rotation, applied vertical wells of drainage networks in Maktaaral and Zhetysay districts. These wells allowed to recharge about 20 thousand hectares. Also collector waters were used, which were diluted with arychnoi water, which is permissible for irrigation. This year the situation could be repeated, so we have also provided the necessary measures," - says A. Kystaubaev.

According to him, in order to reduce losses on irrigation systems, water supply through canal K-19 is automated within the pilot project. This allows specialists to remotely open and close the floodgate, monitor the volume of passing water in cubes, etc., as needed.

About 80% of canals in Turkestan province are earthen, which is the reason of large water losses. Under the ongoing PUID-2 project to improve irrigation and drainage systems, the situation should improve, industry experts say.

Some farmers of the region, realizing the importance of water saving problem, have already switched to drip irrigation in Sarygash, Kazygurt and Keles districts. The total area is about 500 hectares.

"Especially I would like to say on water limit, which is 3 billion 371 million cubic meters for our province at the republican facilities. In the period of low water, it is important for us that the limits are not cut," emphasizes A. Kystaubaev.