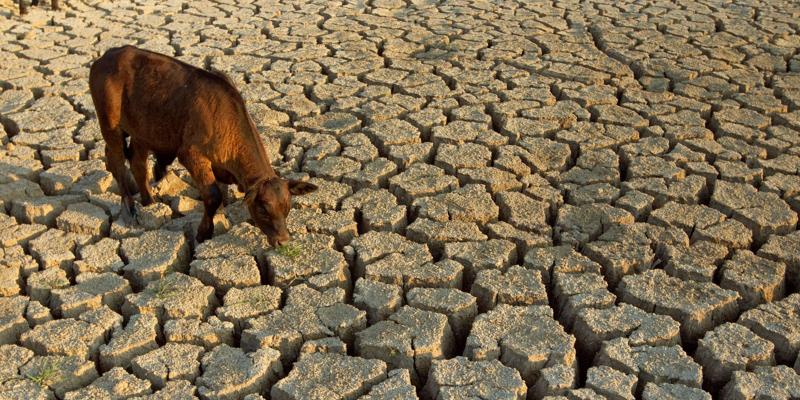 Drought has always instilled terror among farmers throughout the ages. It was impossible to escape from it before the technological progress, but as we see in practice, even today this phenomenon causes a lot of problems. Is it advisable to introduce a state of emergency in the current situation of Kazakh farmers suffering from drought? How did it affect the industry? And is the state support enough for livestock farmers? A World of NAN reporter tried to find answers to these and other questions.

An absolute disaster occurred in the Mangistau and Kyzylorda regions, where the drought led to massive losses of livestock. Livestock breeders in those two regions lost more than 80% of their litter and 20-30% of their herds, according to Almasbek Sadyrbayev, chairman of the Kazakhstan Association of Livestock Breeders.

"In general, the drought itself has affected almost the entire country; East Kazakhstan Region, Pavlodar Region and the northern part of West Kazakhstan Region were less affected. The rest of the country is in flames! Now the situation with livestock deaths may arise in South Kazakhstan and Zhambyl regions. And the cattle losses in the west of the country won't stop, they are to have the heat wave soon. You have to understand, now the livestock are exhausted and dehydrated, and the heat in the open area is hitting them," explained the representative of livestock producers.

The deputy director of the Mangistau branch of NCE Atameken and part-time director of the regional Union of Farmers of Kazakhstan Baktybay Izimtayev confirmed the fact of mass cattle deaths.

"According to official data, 1154 cattle deaths have been confirmed for the region. This means we got reports for 1154 deaths of cattle. And unofficially, the number could be different", - commented on the situation Baktybay Izimtayev.

THE GOVERNMENT HELPS, BUT IT IS NOT ENOUGH.

The representative of NCE Atameken stated that at the initiative of the regional Akim, they personally visited the Ministry of Agriculture. They explained the situation and asked for immediate assistance. They also asked to declare an emergency situation.

Thanks to their efforts, a memorandum of delivery of hay from Aktobe region was concluded. Prodkorporatsiya allocated 630 tons of barley at an affordable price and to date 10 carloads have already been brought, the rest will arrive later.

However, the representative of the Chamber of Entrepreneurs is not planning on stopping there.

"I have sent my proposals to our head office for subsidies for the transportation of fodder and hay. After consideration the head office can send them to the Ministry of Agriculture. Funds will be allocated from the local and national budgets to purchase hay at an affordable price. So far, before the allocation of money, I can't voice official amounts", - added Baktybay Izimtayev.

The state does provide all kinds of support to livestock farmers, but these measures, according to Almasbek Sadyrbayev, are absolutely insufficient.

"This is not even one percent of the actions that need to be carried out across the country," Sadyrbayev said in perplexity.

At this point, the deputy director of Atameken agreed with the chairman of the Cattle Breeders' Association.

"Of course, the measures taken are not enough. The losses are big. Yet it is important here, in my opinion, to take into account the interests of ordinary villagers. After all, not only owners of farms, farmers, but ordinary villagers, who keep cattle in their yards, suffered losses. 56% of livestock in the region is kept in private backyards and only the rest is kept by industrial farmers. So now the main thing is to solve a common issue for all - to reduce the cost of transportation of fodder, hay. It concerns both railway transportation and transportation by roads. I say this as the director of Mangistau branch of the Union of Farmers of Kazakhstan. The problem is common for all villagers - subsidizing the transportation of fodder, "- said the head of the Chamber of Entrepreneurs.

Everyone can criticize the work of the government. However, not everyone can suggest ways to solve this problem. Fortunately, we have people interested in the food security of the country and ready to point out the necessary measures to save livestock.

"Now there is cattle loss, and until the state understands the depth of this problem, they will not look for solutions. We need to acknowledge the problem and then take decisive action. Otherwise, this year we will lose livestock, and next year we will lose the entire branch of agriculture and go back 10 years," - very emotionally expressed his position the chairman of the Association of Livestock Breeders of Kazakhstan Almasbek Sadyrbayev.

At the same time, he voiced his proposals to support farmers. For example, in his opinion, it is necessary to transport livestock from Mangistau and Kyzylorda regions to the most favorable regions. It is also important to provide the affected livestock farmers with fodder through the food corporation; in the meantime, the expert suggests banning the export of grain and fodder. Another important factor is an inventory of all livestock. Also, according to the livestock breeder, it is necessary to organize stable fodder subsidies payouts.

These measures may seem excessive at first glance, but there should be no half measures in matters of food security, according to Almasbek Sadyrbayev.

Should a state of emergency be declared?

On social media, some farmers are actively promoting the idea of a state of emergency because of the drought. But is there any point in it?

To recall, earlier, on 19 June of this year, we reported that the Akimat of Aralsk region of Kyzylorda decided to introduce the state of emergency due to drought and lack of forage for animals. The akimat is waiting for the results of the inspection to this day. Because to declare a state of emergency, it is necessary to obtain the approval of various bodies.

The Emergency Law of the Republic of Kazakhstan states that a state of emergency of natural origin can be declared in the event of an environmental crisis and the destruction of crops. We can also call drought one of such reasons.

However, according to the Law, a state of emergency is introduced only when the political stability of the Republic of Kazakhstan, the security of its citizens are under serious and immediate threat, and the normal functioning of the constitutional bodies of the state is disrupted. Also under the law the state of emergency is introduced in case of impossibility to resolve the situation by other measures. Today, according to the data of the Ministry of Agriculture, the loss of livestock due to the drought in Mangistau and Kyzylorda regions has stopped, respectively, the situation has been resolved.

The issue with the drought in some regions remains open, but it will be solved by the relevant commission, which, as assured by experts, will approach the matter with full responsibility, because according to the law, the state of emergency in the entire country or in some areas is introduced by the President of the country.