Attraction of labor resources during the virgin land campaign 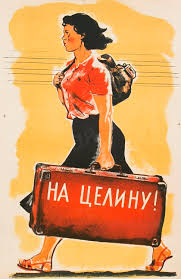 Who was the first on the virgin lands?

In the first three years alone, over 640 thousand people came to Kazakhstan to conquer the virgin lands from all over the Soviet Union. These were people of different ages and different professions. Machine operators, agronomists, builders, engineers, doctors, teachers and even cultural and art workers. The state and the party were given the task of providing the Motherland with such necessary virgin bread as soon as possible. Mostly new settlers traveled from Russia, Ukraine, Belarus, Moldova. However, there were also residents of the Baltic and Transcaucasian republics. At the initial stage, as soon as the start of the virgin campaign became known, all who agreed were accepted. And this led to the fact that more than 640 thousand volunteers arrived in Kazakhstan at the initial stage, but there were about 130 thousand who were really needed here - machine operators, tractor drivers, builders. And this number of specialists is clearly not enough to fulfill the mandate of the party and government in the shortest possible time. Who arrived the first time? There were not enough qualified specialists then. Since volunteers were selected in 1954 by local party organizations, where there were not many specialists who were knowledgeable in agriculture, as such they selected all those who were ready to go to unknown Kazakhstan. Many state farms in Kazakhstan did not have their own chairmen, and more than 20 thousand volunteers came to the virgin lands. In total, only Komsomol organizations sent more than 140 thousand people to the virgin lands from the end of February to April 20, 1954. There have been cases when young men of military age were enlisted in virgin soil brigades. And then, they went to serve from here. Therefore, after the first dispatch, it was decided to strengthen the work to improve the professional level of pioneer workers of virgin lands. Thus, by the end of 1954, specialists, directors of state farms and collective farms, and agronomists began to be involved in this work. In other words, specialists of agriculture.

How much did the virgin lands pioneers receive for their labor?

The organizers of the virgin campaign relied mainly on the labor enthusiasm of the Soviet people, but also did not forget about the material incentive. To understand why many agreed to go to areas where there were no roads or normal communication, payment for their labor should definitely be noted. Everyone who was sent here received a one-time allowance in the amount of a three-month salary, which they received at their previous employment . In addition, they were paid the costs associated with moving to a new job. It should be noted that they did not arrive empty-handed. While still at home, they received a lump sum cash benefit. If a whole family were to come then all its members received payments. Thus, the head of the family received from 500 from 1000 rubles and the rest 150-200 rubles each. Therefore there is nothing surprising in the fact that they traveled as whole families. By 1955, 20 thousand families arrived in Kazakhstan. More than 66.7 thousand graduates of mechanization schools worked at state farms. The virgin lands also had a number of benefits. Such as an additional payment in the amount of up to 30% of the harvest collected in excess of the established plan, they could receive an advance payment, employees of tractor brigades and special detachments of MTS waited for a bonus of 75 kopecks from each centner of grain actually handed over and sold by collective farmers to the state. True, they had to realize the plan. But there were no problems with this in the virgin lands, especially in the early years. They received a supplement to the salary in the amount of 15% to workers, employees, specialists and managers of newly created state farms. In addition, they could take a loan for 10 years to build a house in the amount of 10 thousand rubles. Moreover, 35% of this amount was paid by the state, 1,500 - 2,000 rubles of a loan to buy livestock. Tselina attracted rural youth also because they could get a passport here. By the way, not only citizens of the Soviet Union came here, but also residents of the countries of the Socialist block. Youth brigades from Hungary, Poland, Czechoslovakia, Romania, Bulgaria and even the PRC also worked on virgin lands.

On the scale of labor migration

The scale of labor migration can only be judged by one North Kazakhstan region. If in 1953, 23 thousand machine operators worked at local collective farms and MTS, then just three years later a little more than 150 thousand machine operators worked here. By the end of 1955, 19 new large grain state farms were created in the region. During this year alone, the region received about 18 thousand people from all over the Soviet Union. Among them are 338 engineering and technical workers, more than 500 agronomists, livestock specialists and veterinary workers, more than five thousand tractor drivers and combine harvesters. The big problem at the initial stage, both for Northern Kazakhstan and for all virgin state farms, was the formation of their chairmen. But at the end of 1955, the situation was reversed. By the beginning of 1956, 30 university graduates were headed the state farms and collective farms. In those difficult years, many professional and sensible leaders came to the Kazakhstani agrarian sector, who made a significant contribution to the difficult task of developing virgin and fallow lands. For those who did not have an education, they could take courses on machine operating organized at MTS. Also, agricultural mechanization schools from all over the Soviet Union sent more than 66 thousand of their graduates to the development of virgin and fallow lands. In those years, virgin regions were in dire need of soil scientists. And they came to help. Thousands of soil scientists, botanists, land surveyors, agronomists from Russia, Ukraine, Belarus. They had a lot of hard work to do. Indeed, the success of the entire large-scale campaign depended on the result of their research. And they in the shortest possible time examined 178 regions of the republic. And the result of their work is known to the whole world. In 1956, our republic gave the motherland a record of 16 million 314 thousand tons of grain.