State of agriculture after the Great Patriotic War 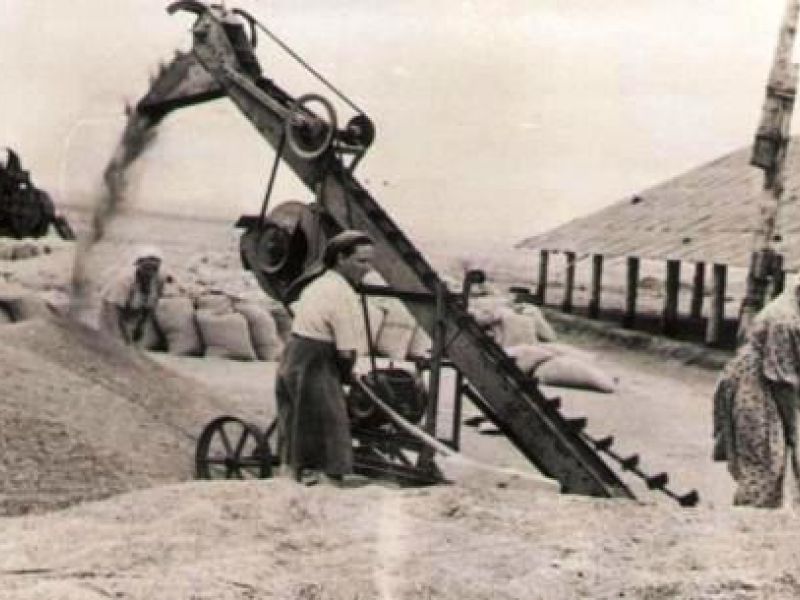 The first postwar year in the agriculture of the USSR

With the end of the Great Patriotic War, the country faced the important task to restore the economy destroyed by the murderous war. But more than that, the consequences of the total destruction of the hundreds of cities, thousands of villages, factories and plants were intensified by the worst drought since the beginning of the century. In the first postwar year, the main grain-growing regions of Ukraine, Moldova and Russia were ravaged by the severe drought, the natural disaster of the untold proportions. This has led to the significant reduction in the wheat crop. Thus, in 1947, it was harvested 98.5 million tons of grain which was 20 million tons less than in the prewar 1940 year. That year the grain has been lost on the area of 4.3 million hectares. On the hundreds of thousands of hectares, the yield did not exceed 4 centners per hectare, which was half less than in 1940 and even much less than in 1945. At the same time, the Government only increased the volume of the obligatory grain supplies, but the procurement prices remained below the indicators of 1940. The negative consequences of the natural cataclysm were aggravated by the fact that the villages were not able to take the appropriate measures to prevent such extensive disasters in the early postwar years. Mainly, it was not followed the key agricultural requirements such as the timing of the sowing campaign and the quality of the seed itself. In many collective farms in Ukraine and Belarus, the peasants had to use the cows instead of horses during the spring sowing works and in some areas they never actually been there. And very soon, the famine has begun in the western regions of the Soviet Union. The Ukrainians were hardest hit from it. Thus, Michael Alman, the Professor of Economics said that from 1 to 1.5 million people died in total in the USSR from the famine of 1946-1947.

From 1946 to 1950, it was harvested on the average 5-6 centners of the grain per hectare. Understanding that another crisis in agriculture was approaching, in December 1946 the Council of Ministers of the USSR has adopted the Regulation “On the expansion of the cultivated lands and the yield enhancement of the grain-crops and especially the spring wheat in the eastern regions of the USSR”. This document, among other things, said that it was necessary to expand the crop acres in the country by 10 million hectares. It was also planned to develop the new cultivated lands in Kazakhstan, Siberia and the Southern Urals. So, by 1949, it was intended to expand the crop lands by 6.5 million hectares in these regions. The result, of course, could not save the situation. At the same time, the authorities have followed the very strict policies in the countryside. For example, from 1946 to 1949, the lands were regularly taken away from the peasants which had been appropriated to them during the weakening of the government control over the village after the collectivization and during the Second World War. These lands were returned to the collective farms. And in 1948, the government got round to the livestock – the private cattle were taken away from the collective farmers. In general, with regard to the animal husbandry situation in those years, it was in the deep crisis. The things in the republic were even worse, for which the cattle breeding was one of the main factors in the development of the agriculture. Thus, by the beginning of the fifties there were only 4.5 million heads of the cattle, 1.5 million horses and 127 thousand camels in the largest livestock breeding region of Kazakhstan. Only sheep showed the growth and by them it was able to move closer towards the benchmark of 18036 thousand heads in 1928.

And in 1949, the pressure on the village began to subside. The State returned to the Kazakh collective farmers the debts of 214 million rubles, the agricultural machinery, the livestock and most importantly - 540 thousand hectares of the illegally seized lands. By the beginning of the fifties, MTS of the republic served 95% of the collective farms against 76% in 1946, and the irrigated lands have been expanded by 16%. The debts of the households for the previous payments were cancelled, the taxes were reduced and the procurement prices for meat, milk, wool, potatoes and vegetables were raised. In 1950 it was conducted another agrarian reform. The collective farms were consolidated. As a result, the number of the collective farms in the republic decreased from 6,773 in 1945 to 2,047 in 1952. The entire settlements have disappeared from the map, the personal allotments have been reduced and the authorities have made to cut down the payment in kind. These measures, of course, did not lead to the improvement in the agriculture. And as a result in the late 40s and early 50s. it has been reappeared the preconditions for the food crisis in the country. At the same time, the situation of the workers has improved, so the salary of the workers in factories and plants and the employees have been increased by the beginning of the fifties  by almost 1.5 times in comparison with 1940. But truly, the retail prices went up 3 times after that so the effect was not significant. But this was not even in the village. The work of the villagers was paid four times lower and the collective farmers did not have the right to move freely around the country. It was urgent to solve the food issue. And it was found. In 1953, the USSR began to develop the virgin and unused lands.